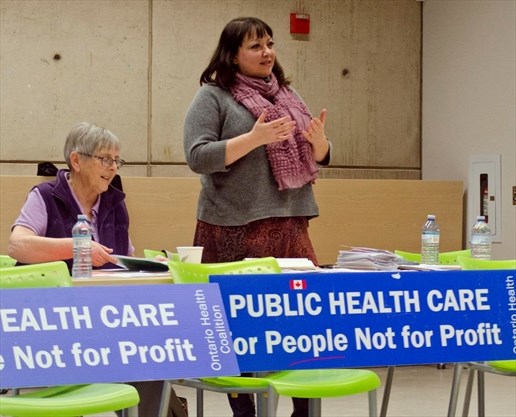 Natalie Mehra, executive director of the Ontario Health Coalition, speaks to a group of St. Catharines residents Monday evening. The coalition is cautioning about changes coming under the proposed Bill 74, the People’s Healthcare Act. – Luke Edwards , Niagara This Week

The Ontario Health Coalition is warning Niagara that its health-care services could be merged with Hamilton and move out of the region if the PC government goes ahead with Bill 74.

While the proposed legislation is dubbed the People’s Healthcare Act, coalition executive director Natalie Mehra said the bill is more about profit and the bottom line of private companies than about the people.

“They called it the People’s Healthcare Act, but really what it is, is a restructuring bill,” she told a small crowd of St. Catharines residents Monday evening.

The coalition is holding a series of meetings this week in the region as it seeks to gather support to slow down the passing of Bill 74 and get a few amendments into the legislation.

Mehra said she fears the legislation would pave the way for one “super agency” that would essentially run health care in the province, providing little local oversight and leading to the centralization of services. Locally, she said that would mean Niagara Health merging with Hamilton Health Sciences, and possibly the transfer of services out of Niagara.

“We all felt the harm that amalgamation did 20 years ago,” said Sue Hotte, chair of the Niagara Health Coalition, referring to consolidation under the Mike Harris government of the 1990s.

She said that amalgamation, and the contracting out of services such as housekeeping that was required to save money to pay off debt, led to the C. difficile epidemic.

For its part, the Ontario government has said the proposed legislation would improve access to services and the patient experience by bringing health-care providers together to work as one team.

“The people of Ontario deserve a connected health-care system that puts their needs first,” said Minister of Health Christine Elliott in a press release announcing the legislation in late February.

“The People’s Healthcare Act is about patient-focused care, that puts patients and their families in control of their own health care, rather than a bloated bureaucracy,” he said. “We are committed to maintaining our publicly funded health-care system, so that everyone in Ontario can access the health care they need and deserve. Any rumours to the contrary are misguided.”

He said the legislation will “allow patients to have a continuum of care that emphasizes community supports” and will create a system that is “nimble and responsive of the needs of patients.”

But Mehra foresees services winding up in larger city centres, and the further privatization of health care services.

While Mehra opposed moves made under the Harris government, she said there was at least public consultation when it was proposed.

“This process has been completely opaque,” she said.

With a PC majority, Mehra said she doesn’t expect the legislation to fail, but is pushing for public hearings to slow it down and possibly put in some amendments to the bill.

To do that, she encouraged those in attendance to contact Premier Doug Ford, Elliott and Oosterhoff to ask for public consultation. They’re also planning a rally at Queen’s Park for the end of April.

Another meeting will be held at Grimsby town hall, 7 p.m. Thursday.