Announcement is welcome, Ontario Health Coalition says, but ‘it’s not the end of the story and it can’t be’ 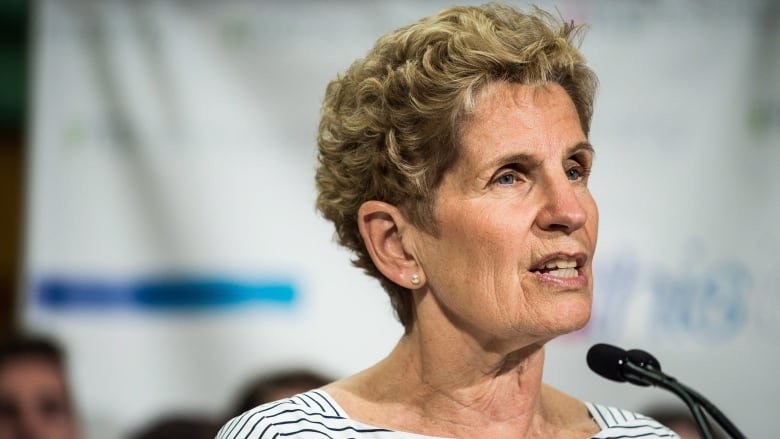 A Liberal government will hire 3,500 more nurses in Ontario, Kathleen Wynne said Thursday, as she took aim at the Progressive Conservatives’ promises to cut the corporate tax rate and reduce government spending by billions of dollars.

“Registered nurses are on the front lines of a more caring Ontario,” said Wynne as she made the announcement at the Hospital for Sick Children in Toronto. She stood at a podium emblazoned with the slogan “Care over cuts,” which has become her rallying cry in the face of polls that put her party firmly behind the Tories.

According to a news release, the hiring process will focus on registered nurses and will include 2,500 nurses to work in hospital settings.

While Wynne did not specify where the money to do so would come from, the Liberals’ 2018 budget increased hospital funding this year by 4.6 per cent, or $822 million. It also included a pledge to hire one registered nurse for each of Ontario’s 627 long-term care facilities.

“A little infusion of cash for one year for an election is a good start, but it’s not the end of the story and it can’t be,” she told CBC Toronto.

“It truly is a crisis in the hospitals now; the level of overcrowding is unheard of. People are lying on stretchers in bathrooms and storage closets,” she added.

During her address, Wynne turned her attention to PC Leader Doug Ford, who has promised to reduce the corporate tax rate, cut taxes for the province’s middle class earners and reduce government spending by at least $6 billion while offering few details on how he would do it.

“There is no way that you can find between $6 billion and $10 billion in services that are delivered by the government of Ontario without cutting health care,” Wynne said.

She added that Ford’s proposal to cut the corporate tax rate from 11.5 to 10.5 per cent would costs the province’s treasury some $1.3 billion annually. Those losses would inevitably have an impact on health care, she said, and would be equivalent to firing 12,000 nurses.

During a campaign stop of his own, Ford said a PC government would not reduce the health care budget.

Ford has said he has a plan to reduce hospital wait times, and also committed to create 15,000 long-term care beds within five years to ease the burden on the hospital system.