Private virtual health services are booming in a ‘policy vacuum’ 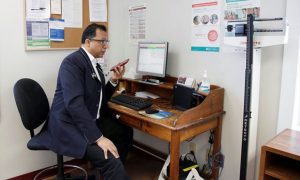 When over-the-counter medication failed to quell a sudden and intense allergic reaction, the Toronto senior turned to her computer in search of a remedy.

A quick Google search brought her to the website of Maple Corp., one of the country’s largest providers of virtual health care.

In no time at all, she was communicating, via secure text messaging, with a family doctor who gave her a prescription for a nasal spray. The doctor also recommended that she try to get out of a dog-sitting arrangement, which appeared to bring on the allergic reaction.

The virtual visit cost the patient $49.

Such transactions are occurring at record rates during the pandemic, which has seen a surge in the use of virtual health-care services.

While it’s widely accepted that growth in virtual care is long overdue, defenders of public medicare question the expanding role of private providers in a publicly funded health system.

As demand for services from companies such as Toronto-based Maple soars, so too does scrutiny.

Critics charge that private providers don’t always act in the best interests of patients and taxpayers, or operate within the provisions of the Canada Health Act.

There is no doubt that virtual care will play an increasing role in the delivery of health services, they acknowledge. But they also argue that the pandemic is exposing shortcomings of the nascent sector and underscoring the need for policymakers and legislators to ensure it is better integrated into Canada’s publicly funded health system.

Charging patients for care that should be publicly insured is a case in point, they contend.

Natalie Mehra, executive director of the Ontario Health Coalition, takes issue with private providers charging patients for online consultations, especially when the Ontario government recently created billing codes to allow doctors to bill OHIP for virtual care, albeit by video or phone, not by text.

“They are violating the core tenets of public medicare in Canada and it has got to be stopped,” she says.

“Charging patients out of pocket for it would mean that the Canada Health Act would be meaningless if that were allowed to continue,” Mehra argued.

Over at Maple, business is indeed booming. Since the start of the pandemic, more than a million new patients have been served by the company, and consultation volumes have tripled, said CEO Dr. Brett Belchetz.

“On our busier days, we process several thousand visits … with the majority of that volume occurring in Ontario,” he said.

Belchetz takes exception to criticism of the growing role that firms such as his are playing. For-profit companies are already widely involved in the provision of health services across Canada, he noted.

“From public-private partnerships that run some of our largest hospitals, to laboratory companies and diagnostic imaging centres, private, for-profit businesses provide the backbone of much of our publicly funded health-care system.” he said. “There is no reason why virtual care shouldn’t involve the private sector in a similar manner.”

Belchetz wants Maple to play an even bigger role in the delivery of health care and would like to see more public coverage for services that companies such as his are capable of providing, he said.

“We would love to see more coverage across the country for broader services, as well as provincial remuneration for cross-provincial care. A national physician licensure for telemedicine would also be a major step forward,” he said explaining that this would allow physicians in well-serviced provinces such as Ontario to care for patients in underserved areas such as the Maritimes and the North.

Last March, the Ontario government introduced a handful of temporary billing codes, known as “K-codes,” to enable doctors to provide routine health-care services by video and telephone. These codes are intended to help with social distancing during the pandemic.

Not included were visits done by secure text messaging, a service Belchetz said patients prefer and one that Maple offered even pre-pandemic.

That meant Maple could charge the woman with the dog allergy $49 for an appointment done by text even though OHIP would pay $36.85 for such a visit if done by phone or video under one of its new codes.

Maple does offer video and phone services, but Belchetz acknowledged it often defaults to text.

“Our broadly available online GP consultations don’t always qualify for OHIP’s K-codes … due to the core components of our platform,” he said, adding that 70 per cent of Maple patients decline video and phone appointments when they’re able to, opting instead for secure messaging.

Doctors affiliated with Maple charge provincial health insurance plans if possible, but when it comes to providing non-publicly covered services, Maple gives patients what they want, he said.

“In any consultation where an Ontario doctor sees an Ontario patient by video or phone and no significant component of the visit is conducted by secure messaging, our doctors will bill the K-codes and not bill privately,” he explained.

“Making that the default scenario isn’t what the vast majority of our patients want, however. Instead, they want to be connected at speeds that can only be achieved with cross-provincial coverage, and once connected, most prefer to discuss their concern via secure text message versus phone or video,” he added.

Belchetz said he would welcome public funding for text messaging.

A recent article in the CMAJ — “Private virtual care thriving in a legal grey zone” — said confusion and convenience may explain why Canadians are still paying privately for virtual-care services even though the public system covers variations of the same service.

In other words, it’s likely many Ontarians are unaware that virtual visits are now publicly covered if done by phone or video but not by text. And even for those who are aware, they may prefer to pay out of pocket for the convenience of a service they can access immediately, 24 hours a day, seven days a week.

In her recent annual report, Ontario Auditor General Bonnie Lysyk said that the province, and all of Canada, for that matter, have historically been slow to expand their virtual-care services. Private virtual care has proliferated to fill the gaps, particularly during the pandemic, she said.

“We found multiple private virtual health-care companies that charge patients in Ontario for a range of services, such as access to medical advice, prescriptions, medical notes, and lab work requisitions. … They offer differing pricing and service packages, such as approximately $50 to $100 depending on the time of day, or membership plans for unlimited visits ranging from a few hundred dollars to over $1,000 per year. Patients either pay out of pocket or through private insurance plans,” she wrote.

Lysyk expressed a number of concerns about the growing presence of private providers in the sector, including:

The province will consider the lessons learned from the pandemic to inform its digital strategy and increase availability of virtual care, the health ministry is quoted as saying in the auditor’s report. That will involve discussions with the Ontario Medical Association, the report states.

Negotiations between the government and OMA on a new fee contract commenced late last year. Many sources have said the issue of virtual care is on the table.

One of the biggest business stories of the past year has been the investment bonanza created by the pandemic in telehealth. Private financiers are seeing lots of opportunities for big returns. A few examples:

Among those with the biggest concerns about the shakeup of Canada’s health-care landscape are family doctors. Dr. Liz Muggah, president of the Ontario College of Family Physicians, is wary of the “corporatization” of health care. While her organization is still consulting members on an official position, she warned of the innate conflict of interest that exists when the provision of medical services “influences a company’s bottom line.”

There is much concern among family doctors that virtual care could interrupt the “continuity of care” for patients. For example, it’s possible that a patient’s family doctor would never be informed of services provided through virtual care.

“It is absolutely critical that there should be an association between the person getting virtual care and the doctor who knows them,” said Dr. Alykhan Abdulla, chair of general and family practice at the OMA.

Not only is this best for patients, but it also ensures that limited health-care resources are used appropriately, he said.

“The fact is that we have limited health-care dollars,” he said. “We really need to thoughtfully use them with the right person at the right time to get the greatest value.”

Dr. David Price, chair of the department of family medicine at McMaster University, warned that the creation of new OHIP fee codes for virtual care will result in the province paying twice for many services. That’s because many family doctors are paid through capitation, a remuneration model that sees them get a set amount of money per patient annually, no matter how many interactions they have with that patient.

If that same patient also seeks out OHIP-covered virtual care from another doctor, taxpayers will be forking out twice for the same service, Price explained.

“This is just a straight-up duplication of services,” he said. “There’s a duplication that could become extraordinarily costly with pretty dubious quality.”

The Canadian Health Coalition has been closely watching the rapid changes to the virtual-care sector, said Melanie Benard, national director of policy and advocacy.