By: Derek Dunn, The Star 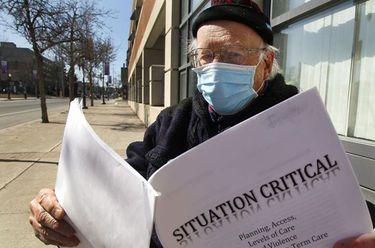 A coalition of more than 400 health organizations with chapters all around the Arnprior Renfrew area is seeking to establish one in the county.

The idea is meeting with approval from Renfrew county’s leading health official, Dr. Robert Cushman. The Acting Medical Officer of Health with experience in the field dating back to the early 1970s said the system must change and citizen views play a crucial role.

“We really need health care reform,” Cushman said. “Having a citizen coalition to advocate for not only large scale but to help individuals – that’s commendable.”

He listed several areas in need of attention, all of which were also cited by a member of the Ontario Health Coalition based in Ottawa. Cushman talked of greater home care (the Ford government was moving toward more spending on hospitals before the election call). The lack of family physicians is another problem; it is estimated that 50 per cent of county residents have no family doctor.

However, Renfrew paramedic services is far superior to most other regions in Ontario, he added.

Ed Cashman agrees on all points. From Ottawa, he is the volunteer at Ontario Health Coalition fielding many calls from Renfrew during the pandemic. Helping patients navigate the system is among the duties his organization undertakes.

“Let’s start with what’s working in Renfrew county. The paramedic service is top of the line,” Cashman said. “It’s in primary care – family doctors – that is very serious. Not having follow ups means people are going to the ER when they shouldn’t be. And if you don’t have a car, you’re out of luck.”

The government should allow for more medical students and lessen restrictions on those who study outside Canada, he said. New doctors, often burdened with student debt, opt to specialize rather than taken on the costs of setting up a private practice (staff, rent and more). The government should assist in these areas, Cashman said, adding that doctor salaries are not an issue.

The “umbrella” organization is non-profit and non-partisan. Nevertheless, it is outspoken – through rallies and media campaigns – about defending the public health care system and strengthen the principles of the Canada Health Act. It opposes what it calls the Ford government’s privatization of hospitals, supports more long-term care staff, and recently called for a reinstated mask mandate.

Local chapters are often comprised of board members who are from the health care sector, retired or working, often union members. With a board in place, members would be invited to help assist local patients and address local needs.

“We were surprised at how many calls we were getting from Renfrew county during the early stages of the pandemic,” Cashman said, who recently helped set up a chapter in Cornwall. “The people of Renfrew county need a voice and it should be their voice, not somebody from Ottawa.”