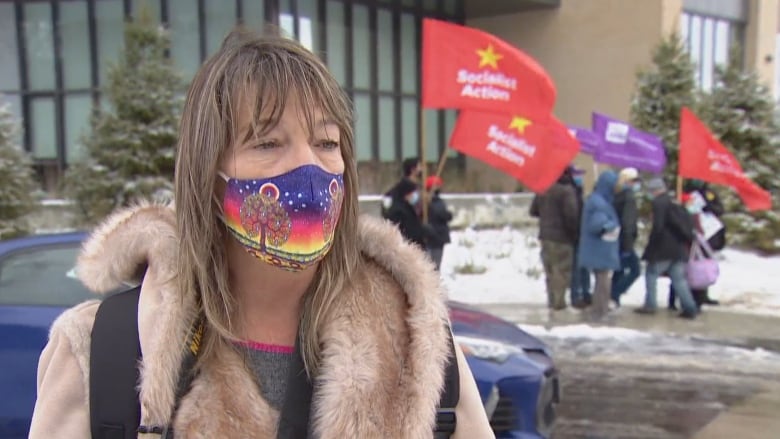 Maureen McDermott, a protester, wondered aloud at the rally how many people have to die before Ontario Premier Doug Ford and Long-Term Care Minister Merrilee Fullerton bring in the Canadian Armed Forces. (Keith Burgess/CBC)

Scores of people protested outside a Scarborough long-term care home on Saturday to draw attention to conditions inside the facility where 60 residents have died of COVID-19.

Tendercare Living Centre, 1020 McNicoll Ave., has lost 60 residents to the novel coronavirus as of Saturday, according to North York General Hospital (NYGH). The provincial government asked NYGH on Dec. 25 to help the home manage its COVID-19 outbreak for 90 days.

Maureen McDermott, a protester whose mother is in River Glen Haven Nursing Home in Sutton, Ont., wondered aloud at the rally how many people have to die before Ontario Premier Doug Ford and Long-Term Care Minister Merrilee Fullerton bring in the Canadian Armed Forces.

“What’s that number going to look like tomorrow and the next day? This is disgusting,” McDermott told the gathering,

“And Pandora’s Box has been opened to show time after time that it’s profits, not care, that is happening.”

“She needs to come in, see it and fix it,” McDermott said. “It has to be fixed. No more band-aid solutions.”

McDermott said everyone, including families, health care workers and the general public, needs to rally around long-term care to demand better living conditions for residents.

“This is an absolute crisis in Ontario,” she said. “This government drags its feet way too much. Suddenly, it has become acceptable in Ontario for seniors to die over profits.”

The deaths are shameful for the province, she said.

The hospital said, as of Saturday, there had been no new resident or staff cases for the third day in a row and it brought in more staff in the last week. Staffing is now over baseline, which means there is now a higher ratio of staff to residents than there normally is at the home.

The hospital added that the return of existing staff who have recovered from the novel coronavirus will help to ensure strong staffing now and after the outbreak ends.

“Physician coverage at the long-term care home continues to be very strong, with physicians from NYGH and beyond providing medical care on site. All clinical staff, including physicians and nurses, are involved in ensuring residents receive proper nutrition and hydration. Clinical staff members are also carefully managing medication for all residents,” Janine Hopkins, spokesperson for the hospital, said in a statement on Saturday.

Since it signed a voluntary management agreement, the hospital said there have been “significant improvements” in efforts to curb the outbreak, enhance safety and care of residents and address staff shortages.

“One of the terrible realities of COVID-19 is that older adults have a high risk of morbidity and mortality. The natural course of infection is for people to have mild symptoms (such as fever, dry cough) for the first seven to 10 days after onset. Beyond that point, some residents resolve their infection while others have complications and pass away despite the heroic efforts of health professionals,” Janine Hopkins, spokesperson for NYGH, said in a statement on Saturday.

Families of residents are being kept informed of developments through a newsletter, weekly town halls and a toll-free support line.

Corey David, one of 27 candidates for the Jan. 15 byelection in Ward 22, Scarborough-Agincourt to replace Jim Karygiannis, helped to organize the rally. He said in an interview after the event that organizers want to point out that nobody should profit or exploit vulnerable people in Ontario.

“What is going on in the long-term care sector is really upsetting,” David said. “This should never have happened. Somebody should be held accountable for this.”

David said all three levels of government should intervene to prevent COVID-19 long-term care deaths. Tendercare is located in Ward 22. 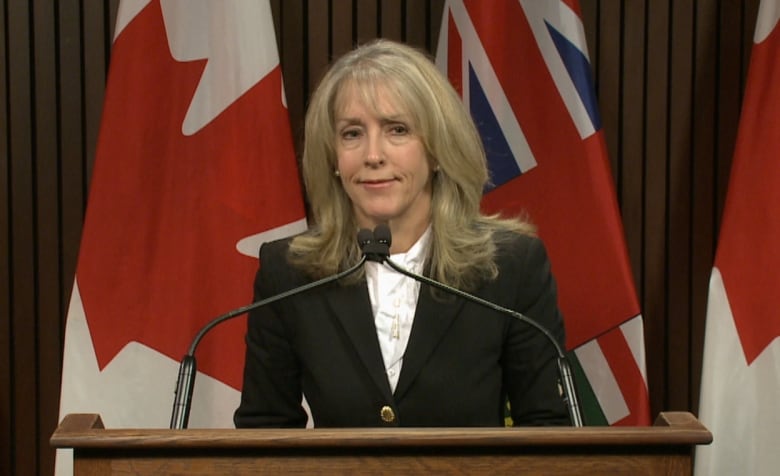 In a statement on Saturday, Justine Teplycky, spokesperson for Fullerton, said the long-term care ministry is working closely with its partners, including Toronto Public Health, to address the Tendercare outbreak.

“Staffing at the home is now above levels during normal operations for Personal Support Workers and registered staff. Infection Prevention and Control audits have shown significant improvement this week. Environmental Services staff are on site and continue to clean the home,” Teplycky said.

She said NYGH and Tendercare staff members are working around the clock to stop the outbreak.

“We remain committed to doing everything we can, along with our partners, to help stabilize the home and have them return to normal operations.”

The Ontario Health Coalition, a non-profit organization that has more than 400 member organizations, and the Canadian Union of Public Employees called for military intervention on Saturday to address COVID-19 outbreaks in long-term care homes in Ontario.