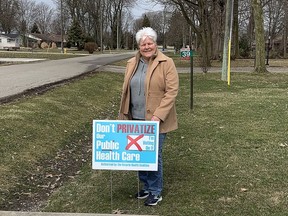 Heather Kavanagh, of Chatham, is shown with a lawn sign from the Ontario Health Coalition with a message against health care privatization. Area health coalitions are holding a virtual event on the issue on April 7. PHOTO BY HANDOUT

The co-chair of Southwestern Ontario health care advocacy groups is calling on people to attend a virtual summit to learn how to fight back against privatization of the industry.

Shirley Roebuck, with the health coalitions for Chatham-Kent, Sarnia-Lambton and Wallaceburg-Walpole Island, will be hosting the free public event over Zoom on April 7 at 7 p.m. She said the speakers at this “emergency summit” will educate and provide ways for residents to raise their concerns.

“To that end, we are fundraising and we have a lawn sign campaign that we are just beginning now,” Roebuck said. “We would really like to see a lot of lawn signs up in Chatham-Kent, not just in the city of Chatham, but all across the municipality, saying that we want our health care to remain public.”

Other summits from chapters of the Ontario Health Coalition have already been held and there are others planned for different parts of Ontario.

The campaign is partially in response to comments made by Ontario Health Minister Christine Elliott during a Feb. 1 announcement about ramping up surgeries after non-urgent procedures were postponed earlier this year.

Elliott said the government “making sure that we can let independent health facilities operate” and she mentioned “private hospitals.”

However, in a late-February email ,the spokesperson for the minister told Postmedia the government “is committed to supporting the province’s public health-care system.”

“The use or function of private hospitals and independent health facilities in Ontario is not being expanded or changed,” Alexandra Hilkene said in a statement.

“The use or function of private hospitals and independent health facilities in Ontario is not being expanded or changed,” Alexandra Hilkene said in a statement.

“Minister Elliott’s comments were in reference to the gradual resumption of previously scheduled non-urgent surgeries and procedures that were delayed as part of Directive 2 at public hospitals as well as existing independent health facilities and private hospitals in Ontario.

“We recognize the impact the delay of certain surgeries and procedures has had on patients. These facilities perform publicly (OHIP) funded procedures and will ensure patients can access the health care they need when they need it.”

Despite the statement from the minister’s office, Roebuck said she isn’t convinced.

“I don’t believe them,” she said. “It may take a number of years to fully privatize it, but I do not believe it.”

The Zoom link to attend the event can be found through the Ontario Health Coalition website at www.ontariohealthcoalition.ca or by searching for the Chatham-Kent Health Coalition group on Facebook.