‘This is a war’ against COVID-19, says former mayor Jim Gordon, and a Northern Bubble would be a powerful weapon 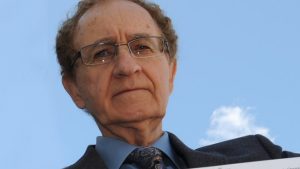 Former Sudbury mayor and MPP Jim Gordon told Sudbury.com that his recent calls for a Northern Bubble and participation in a discussion panel are because he believes Sudbury, and Northern Ontario “needs to stand up and fight back.” (File)

Former Sudbury mayor and MPP Jim Gordon told Sudbury.com that his recent calls for a Northern Bubble and participation in a discussion panel are because he believes Sudbury, and Northern Ontario “needs to stand up and fight back.”

“This is a war,” said Gordon. “And when there’s a war, you have to take certain measures. If we want to defeat this, we have to be ready to experience some pain.”

The pain he refers to is the discussion to form a ‘bubble’ around Northern Ontario, one that would prevent Southern Ontario travellers from entering in the North, except if they are on business – even if that means setting up signs, checkpoints and enlisting the help of everyone possible to keep out the COVID-19 virus, and especially the new variants, such as the one ravaging the Roberta Place long-term care facility in Barrie.

Mayor Brian Bigger is also vocal about his belief in a Northern Bubble and released a statement on Feb. 1 to that end, noting that he planned to speak to both provincial governments and local leaders in order to find a solution.

“I will be reaching out to the province again this week to request an action plan that will either stop or stymie traffic flow up Highway 69 unless absolutely necessary and expedite the flow of vaccines to us up here,” the mayor’s statement reads.

“The concept of checkpoints is not unrealistic and it has been proven as an effective tool. We are in the middle of winter and at a crossroads in this pandemic. To remain safe, we need to insulate our city for a short amount of time and by any means necessary stop the spread of the COVID-19 variant that is creeping north.”

The panel that gathered in an online panel forum to discuss the mayor’s call for action included Dot Klein, co-chair of the Sudbury chapter of the Ontario Health Coalition, Hugh Kruzel, chair of CARP Sudbury, Jim Gordon and Dr. Peter Zalan, past president of the medical staff at Health Sciences North. The panel was hosted by John Lindsay of Friendly to Seniors Sudbury.

Zalan, who has been calling for travel restrictions since April 2020, spoke of the “viral chaos” occurring in southern Ontario.

“We used to be Yellow (under the province’s pandemic response plan) here living in Sudbury, far removed from the viral chaos of Southern Ontario,” said Zalan to the panel. “No infection numbers, fewer hospitalizations, no deaths since the spring so we figured that we had it pretty good and we could just carry on doing whatever we’re doing.”

But the region can no longer assume the coronavirus is not a danger within the community, he said.

“I’m worried. I think others are worried. Brian Bigger is worried and it is all about the variants.

“The tragic situation at Roberta Place in Barrie is one that is heightening the fear. It’s pretty close to us,” said Zalan.

And though the actual logistics of the closure, including constitutional issues, legal issues, land rights – not to mention the flow of goods that is required – would take planning, organization and labour, those are not obstacles Gordon thinks should stand in the way. He believes that when one is at war, all measures must be undertaken to protect the safety of the local community.

“It’s not an impossibility,” he said. “Find out what other people have done to succeed in this war that the human race is fighting.”

He also said the time for half-measures is long gone.

“We’re literally waffling over this pandemic,” Gordon said, “trying to convince ourselves that we can take these half-measures now. What they do is they take a half-measure, and then when it seems to work a while and things get a little bit better, then everybody tries to go back to more normal in Canada, but then when the virus shows up again, they do it again.”

Though he said he does not have all the answers, Gordon said it is time for Northerners to demand action.

One suggestion Gordon did make was to deputize firefighters to work checkpoints and offer rapid testing to all those travelling north, and to install signage along all main northbound highways reminding travellers to “travel for business but not socially.” Additionally, he said rapid tests should be administered to all those entering and exiting the city.

“They won’t even want to come if they have to have that.”

Gordon said this fight begins with members of the public contacting the mayor’s office to inform them that you support the bubble, and emailing Premier Doug Ford’s office to voice your thoughts.

He also calls for northern leaders to be brave in the face of obstacles to overcome.

“This is a war,” he said again. “You have to be willing to stand up and fight this war. If you’re a leader, and you’re not willing to be the leader, to fight the war, then I think you should step down and let somebody else take over who will.”

Jenny Lamothe is a Local Journalism Reporter at Sudbury.com, covering issues in the Black, immigrant and Francophone communities, as well as COVID-19 on occasion. She is also a freelance writer and voice actor.