‘This is just the beginning of the fight’ 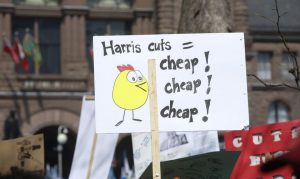 North Bay health care professionals and patient advocates will join thousands from across the province warning the public about privatization.

A rally is planned for April 30 at noon at Queen’s Park. Early numbers indicate 10,000 people will attend.

“More than 150,000 nurses, doctors and support staff from more than 100 hospitals across the province will be wearing stickers warning about health care privatization,” that day.

“Now they are cutting half-a-billion from OHIP services, cutting public health, restructuring and privatizing ambulance services, imposing funding constraints on hospitals and health care,” Mehra said. “We are hearing from thousands of people who are upset and angry at the betrayal. We will not allow them to cut and privatize health care. This is just the beginning of the fight.”

Mehra said the coalition is hearing from chronic patients, parents of autistic children, patients suffering from Crohn’s and colitis and small and rural communities concerned services will be relocated.

“We’re also extremely concerned back-room deals are being made at Queen’s Park.”

“Other communities having gone through similar cuts haven’t fared well. Our rural communities are very anxious about their hospitals and urban centres will also be under massive stress.”

McKenna said she’s confident that people will not stand by and watch them get dismantled and privatized.

“It is now clear that a wide range of hospital clinical and support services, ambulance services and labs are targeted for privatization; that all new long-term are beds will roll out in the private sector and that 3,000 new hospital beds will be built in privately owned and operated hospitals,” warned Michael Hurley, president of the Ontario Council of Hospital Unions representing support staff, nurses, health professionals, paramedics, personal support workers and other health-care workers across Ontario.