The Ontario Health Coalition is calling on the Ford Government to expand public health care services while preventing cuts to the sector.

Armed with signs and flags, the Ontario Health Coalition marched at Queen’s Park on Tuesday.

“I think they’re playing games with words,” said Natalie Mehra, executive director of the Ontario Health Coalition.  “Liberals, too, froze hospital funding at zero for four years. In real dollar terms, inflation goes up, hospital funding stays at zero and of course, there are cuts.” 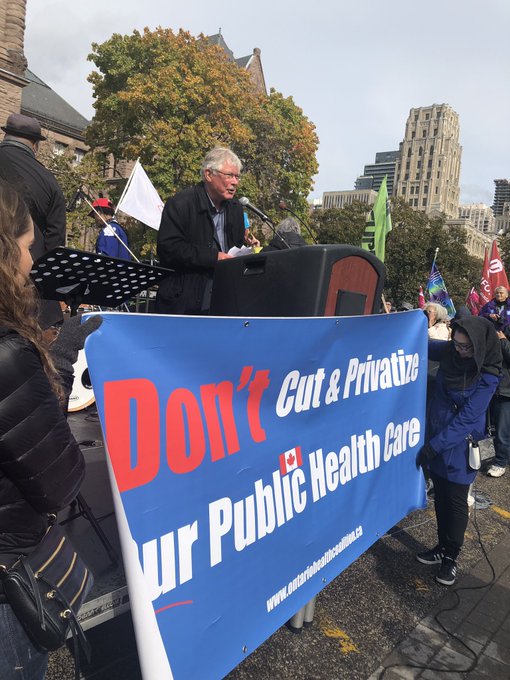 Approximately 75 coalition members attended the rally from Peterborough and Lindsay. They were joined by union members from OPSEU, CUPE as well as the teachers federation.

It said it realizes the province is reviewing all provincial funding heading into its fall economic update. But the coalition fears it could lead to health care cuts.

“This review should not be privatizing our services or restricting our access or merging and consolidating hospitals, which cuts off access,” said Roy Brady, co-chair of Peterborough Health Coalition.

The coalition specifically pointed to the proposed integration of Peterborough Regional Health Centre and Ross Memorial Hospital into one entity with two locations.

“We see the plan in Lindsay to amalgamate the hospital, which will lead to a loss of services on the ground. There are actually cuts to health care,” Mehra said.

The hospitals held public consultations throughout the summer before making a joint application to the Central East Local Health Integration Network.

“We are going to keep a close watch on what’s happening locally,” added Brady.  “But we are also going to watch the review, and be ready to react to let the people know.”

“For 15 years, the Liberal government failed to develop a comprehensive health care strategy,” said Hayley Chazan, spokesperson to the minister of Health, Christine Elliott.  “That is why we’re working with partners in health care to develop a long-term transformational health care plan.”

The Ministry of Health and Long Term Care went on to say it was investing $80 million to secure more than 1,100 beds and spaces to ease hospital gridlock across Ontario.