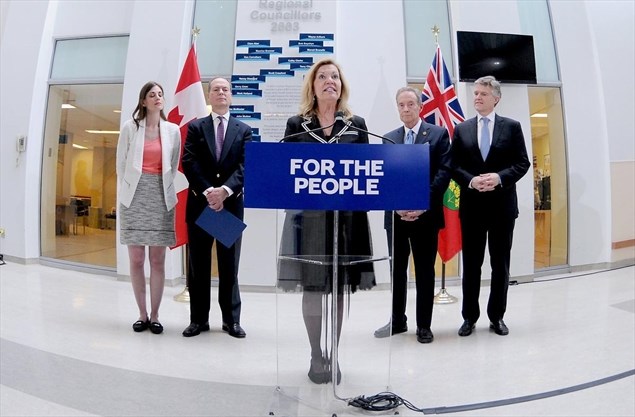 Health Minister Christine Elliott was joined by some Durham MPPs while announcing the government is moving to an integrated health care system with the aim of ending ‘hallway health care’. From left are Durham MPP Lindsay Park, Pickering-Uxbridge MPP Peter Bethlenfalvy, Whitby MPP Lorne Coe and Ajax MPP Rod Phillips. She made the announcement at the Ajax-Pickering Hospital on Friday. Some Peterborough opponents of the changes are piling onto buses bound for Queen’s Park on Tuesday for a rally. – Ron Pietroniro , Oshawa This Week

Concerned citizens are piling onto buses bound for Queen’s Park on Tuesday to join a rally aimed at protecting public health care.

At least three busloads of locals and union members are expected to travel to Toronto to oppose the provincial government’s legislation to restructure the Ontario public health care system.

The Ontario Health Coalition has organized the rally to protest cuts to health care, mergers and privatization.

Roy Brady, chair of the Peterborough Health Coalition, is among the group that’s headed for Toronto.

With the passing of Bill 74 — The People’s Health Care Act — Brady said the Ontario government has the power to do “anything it wants.”

Most concerning, Brady said, are the cuts to the health care system and the introduction of Ontario Health, a new “super agency” that folds more than 20 health agencies into one, including the Central East Local Health Integration Network.

“We don’t know what’s in store with the super agency.”

Cuts to health care so far include slashes to autism funding, the dementia strategy, OHIP and the cancellation of all new planned overdose prevention sites, for instance.

Health units will also be withered down from 35 to 10.