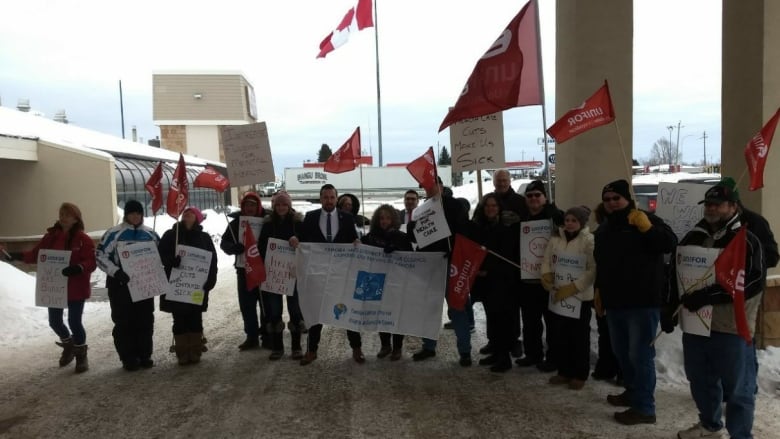 A group of health care workers held a rally outside the Dryden, Ont., hotel were the province is holding its pre-budget consultation meetings. (Unifor)

A health care advocacy group in Thunder Bay worries the Ford government will cut hospital spending, and hopes a presentation to a pre-budget hearing session in Dryden will make an impact.

The government’s Standing Committees on Finance and Economic Affairs, which held its only consultation in northwestern Ontario in Dryden, heard from the Thunder Bay Health Coalition twice during its day-long event.

“I’m not holding out much hope that anything’s going to happen, but we have to make the argument, right?,” said Jules Tupker, the chair of the coalition.

He said the province should be spending 5.3 per cent more on hospital budgets than it does now, just to keep established services operating at their current level.

“And, it’s funny because I was asked the question, ‘without giving money, what more can we do? What more can be done to help health care?'”

Tupker said he told the MPPs sitting at the table more is needed to help people before they come into contact with the health system, such as ensuring there is adequate housing in the province.

He said other spending priorities need to be ensuring long-term care facilities are properly funded and staffed, along with homecare and other essential health services.

“They understood what the problem was,” he said, “but whether they’re going to do anything about it, I really have my doubts as their leader says he’s going to cut $22 billion out of the budget over the next four years.”

Unions that represent workers in the health care field, including Unifor, OPSEU and CUPE held a rally outside of the hotel in Dryden where the consultations are taking place. The group of unions, along with the Ontario Health Coalitions are holding the rallies at consultations across the province.