By: Luke Hendry, The Intelligencer 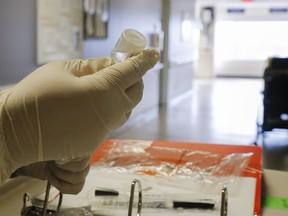 A nurse prepares medication in a Belleville General Hospital hallway in 2017. Advocates for public health care are raising the alarm about the risks of private care and calling for Ontarians to oppose what they say is shift toward privatization by the provincial government. PHOTO BY LUKE HENDRY

Ontarians must press all political parties to choose public health care over privatization, advocates said during a Quinte-Northumberland summit on the topic.

“We want to see some improvements in publicly-funded and delivered health care,” Mackenzie-Nicholas said in a pre-summit telephone interview.

But in a statement Friday, Deputy Premier and Health Minister Christine Elliott’s press secretary, Alexandra Hilkene, refuted some of the coalition’s claims and said the group was interpreting incorrectly a comment by Elliott.

“The use or function of private hospitals and independent health facilities in Ontario is not being expanded or changed,” Hilkene wrote.

The coalition has claimed Elliott’s remark two months ago, as she spoke about the return to non-urgent surgery, is proof of a privatization plan by the government. She said the government was “making sure that we can let independent health facilities operate” and made reference to “private hospitals.”

“She was listing facilities that were able to gradually resume non-urgent procedures, such as pediatric hospitals, independent health facilities and private hospitals.

“She did not ever suggest letting independent health facilities operate private hospitals – in fact that is not even feasible,” wrote Hilkene. She added there are now four private hospitals licensed to operate in Ontario compared to 19 in 1980 and the last licence was issued in 1973.

Thursday’s online summit session drew a total of about 60 speakers and viewers.

The moderator was Trenton’s Marg Bourgoin, president of the Quinte Labour Council and an executive member of the Service Employees International Union’s healthcare branch.

“It’s all funded appropriately, and so we believe there’s a mixture for both,” she said, adding Ontario “would be in a very bad situation right now” if private long-term care were to end. She cited a waiting list of more than 30,000 people.

“I think what the government is saying is they may have to pay more if we use the public system,” Sutherland countered.

“It’s much cheaper if we just work with a public system.”

“We do not know how safe these companies are, yet we are getting play-by-play updates on the safety of public hospitals.

“Home care’s a complete mess … probably the most disastrous of all the parts of health care, in a way,” he said, criticizing the competitive bidding and more.

“It just doesn’t work for anyone who wants to stay home.”

He also quoted a 2020 study published in the Canadian Medical Association Journal.

“For-profit status is associated with the extent of an outbreak of COVID-19 in LTC homes and the number of resident deaths, but not the likelihood of outbreaks,” the researchers wrote.

Ontario grants 30-year contracts to operators, he said, and “the same money” goes to private and public organizations.

“You may as well give it to the place where you’re getting the best care.”

“The point is in the last 30 years they haven’t used any of their money to reinvest in the system, saying the lack of such investment – such as by creating rooms with fewer beds – fuelled COVID-19 outbreaks.

“The United States – the most privatized, developed health system – spends 25 per cent more per person on health care than the next-most-expensive country.”

Medical laboratory technologist Sara Labelle has spent much of the pandemic testing patient samples for COVID-19.

“The cost of privatization is death,” she said, again pointing to deaths in long-term care.

“This really is about pulling resources away from a public model into a for-profit model where people will eventually have to pay user fees.”

She said the health sector already lacks resources and should be a key issue in June’s provincial election.

He said there has been a “slow creep” of allowing more services to be provided by for-profit providers.

“These folks have deep pockets and they make deep, deep contributions to these political parties,” Sanderson said.

Campbellford resident Kim McArthur-Jackson, a co-chair of the Northumberland Social Justice Coalition, said care must be “well-funded and universally accessible” to all Ontarians.

She added public and private providers order the same supplies, etc., which could allow suppliers to hike prices “because they know they can.

One participant in the meeting asked how private providers recruit professionals, which speakers said hurts the public system.

The nurses’ association’s Sanderson said people working in private clinics, for example, may be able to focus on their preferred forms of care.

Providers sometimes “charge their patients for services that are not essential,” he said.

Nurses may choose private care because the shifts are those of a typical work week, not the longer, irregular shift work seen in the public system.

Linda Mackenzie-Nicholas of the Northumberland Health Coalition called upon listeners to help raise awareness of the issues.

Two years into the pandemic, she said, “Very little has been done to resolve the very real problems we saw” in health care.

She asked people to donate to the Ontario coalition, volunteer, and post signs and vehicle decals to be distributed by the coalition. She emphasized the need for individual donations, noting third-party groups, such as unions and businesses, are prohibited by law from donating.