Group concerned Bill 74 will lead to privatization of health services 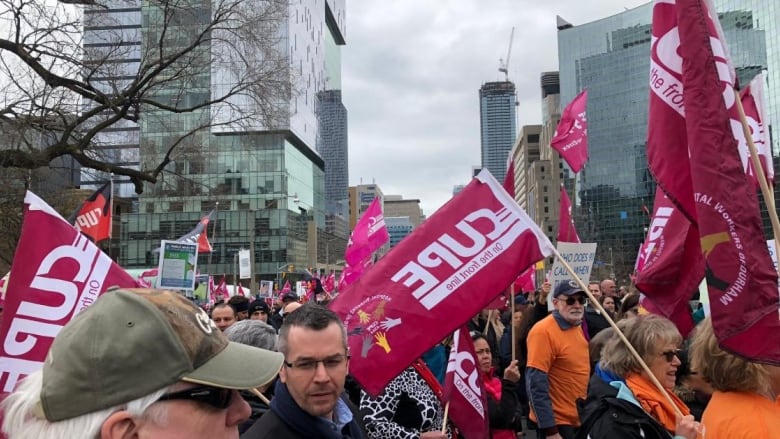 Thousands rally outside Queen’s Park in Toronto Tuesday against Bill 74. The Ontario Health Coalition organized the rally in protest against the bill they believe will lead to more privatized services. (Lisa Xing/CBC)

Two busloads of protestors from Waterloo Region have joined thousands of others at Queens Park Tuesday for a health care rally against Bill 74.

The Ontario government has made several changes to healthcare since passing the bill including dissolving Ontario’s Local Health Integration Networks, eHealth Ontario and Cancer Care Ontario.

All have been replaced with a single oversight agency that will be called Ontario Health.

Those attending the rally, which was organized by the Ontario Health Coalition, are concerned with private health systems creeping into the public health care system.

Riani De Wet is with the Waterloo Region Health Coalition. It is the local chapter to the OHC.

She said they’re concerned the new Ontario Health agency will have too much power.

She’s particularly concerned about the agency’s control over allocating services, and she fears privatisation could ultimately creep in.

“The thing with private services is, at the moment, OHIP covers it. But the more we give to private services, the less control we have over how much they charge,” said De Wet.

People from London, Stratford and Guelph also joined the rally.

“We are ensuring that health care dollars are being spent where they will do the most good for Ontarians, on front line care, in a system that is centered around the patient,” Minister Christine Elliot said in an email to CBC Kitchener-Waterloo

“By relentlessly focusing on the patient experience, and on better connected care, our government will reduce wait times and end hallway health care.”