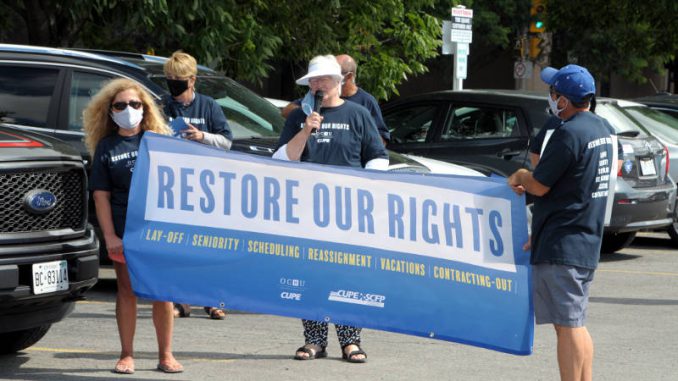 CORNWALL – Around 30 members and allies of the Canadian Union of Public Employees (CUPE) and the Ontario Council of Hospital Unions (OCHU) held a demonstration Wednesday morning outside MPP Jim McDonell’s office.

The unions are upset with the Progressive Conservatives’ Reopening Ontario Bill 195, which they say is violating collective agreements. They accuse some employers of taking advantage of the coronavirus pandemic to circumvent contract language.

In an interview with Cornwall Newswatch, Wicks says their HR manager has been good about following the collective agreement as closely as possible. But the same can’t be said for other locals in SD&G.

“Fortunately, for us, our particular local (members) haven’t experienced a lot of problems whereas other locals have. It’s just so disheartening that people have made so many sacrifices during this COVID pandemic,” Wicks said.

The medical device reprocessing technician says she redeployed to the COVID-19 assessment center for two months.

“Our hospital in general has not experienced a lot of violation of our (contract) language and we’re so fortunate that way. But the bigger hospitals, unfortunately, aren’t so lucky. So this is why they are fighting for them,” Wicks said.

Wicks says in other areas of SD&G there has been “outright refusals” for vacation, arbitrary scheduling and deploying workers “in places where they’re not even qualified.”

Elaine MacDonald with the Ontario Health Coalition and the Cornwall and District Labour Council also spoke, along with other CUPE representatives.

Summing up the union’s feeling, one CUPE member from Kingston said “we’re pissed” with the government.

A similar demonstration was held yesterday outside MPP Steve Clark’s office in Brockville. The next one is next week in Kenora, in northwestern Ontario. Others will take place through the end of October.