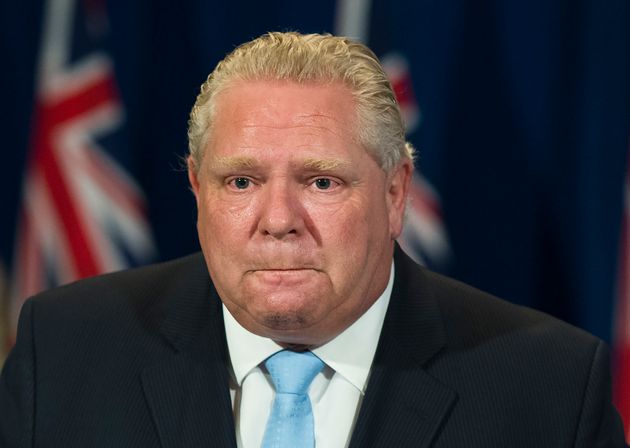 Ontario Premier Doug Ford fights back tears as he answers question about a disturbing report from the Canadian military regarding five Ontario long-term-care homes in Toronto on May 26, 2020.

The report described shocking conditions in five homes: residents not being fed, bathed, or given their medication; people being force fed until they choked; homes infested with flies and cockroaches; vital supplies locked away from workers; and no adherence to basic infection prevention protocol like hand washing and isolating people who had COVID-19.

“I will move heaven and earth to do what is right, to help these people, to help those who need us,” Ford vowed at his press briefing that day, May 26. “That is our job.”

One reporter was blunt with him.

“I will move heaven and earth to do what is right, to help these people, to help those who need us.”

“It’s not that hard to figure out what these long-standing systemic problems are in long-term care,” Cynthia Mulligan of CityNews said to Ford. “There are no standards. There aren’t enough staff. They’re underpaid. They’re undervalued. They’re undertrained. And they’re only given part-time hours.

“How quickly do you pledge to turn that around? You don’t need an inquiry or a commission to tell you these things.”

Ford responded, “I agree 100 per cent.” He promised “immediate action,” noting his government had already referred one incident from the military’s report to the provincial coroner for investigation: the choking death of a resident who had been fed lying down. 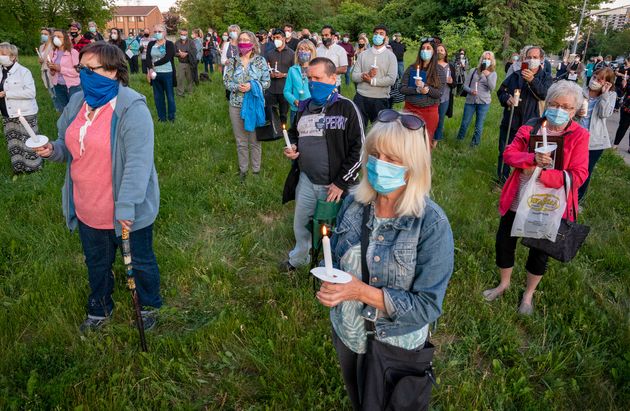 But since that day, anger about Ford’s handling of COVID-19 in long-term care has snowballed. Of the 4,188 lives lost to COVID-19 in Ontario as of late December, 2,537 lived in long-term care. Some advocates and family members now look back on that press conference with disdain, describing the premier’s reaction as “crocodile tears.”

The premier’s office did not respond to a request for comment. Neither did a spokesperson for Minister of Long-Term Care Merrilee Fullerton.

Ford did strike a commission to look into how and why the virus spread so rapidly through nursing homes. The commission hasn’t yet released its final report, but it has released interim reports and called out Ford’s government for cutting comprehensive annual inspections of homes.

Fullerton has said in statements she appreciates the Commissioners’ reports and the government is already working on some of the issues they’ve raised.

Cathy Parkes, whose father Paul died of COVID-19 at one of the homes included in the military report, says Ford has failed to keep the promises he made in May.

“When I saw him crying, I had a moment of ‘Oh, maybe he does get it,’” Parkes told HuffPost Canada. “And then I realized not too long afterwards that it’s crocodile tears. Because the actions don’t follow the statements.”

Cathy Parkes lost her father Paul, right, during the COVID-19 outbreak at Orchard Villa long-term care home in Pickering, Ont. Orchard Villa was one of the five homes included in a military report that Premier Doug Ford called “horrific.”

Parkes’ life has been turned upside down since her father died on April 15. She says she was traumatized by the way he died, scared and alone, and has sought out therapy.

At the same time, she’s taken on a public role as an advocate — appearing at press conferences with Ontario NDP Leader Andrea Horwath, hosting an event at Parliament Hill and meeting with MPs. She gave her first on-camera interview the day of her dad’s burial.

“I’ve been so let down by the provincial government that I’ve actually switched my focus to federal,” Parkes said.

She said all her efforts will go towards advocating for a national standard for long-term care homes, something Prime Minister Justin Trudeau has suggested he would support.

Any policies the Ford government is implementing will be too little, too late, Parkes said.

She noted that the government’s recent plan to hire 27,000 new full-time staff for long-term care isn’t expected to be completed until 2024-25. Parkes said that lets down thousands of current residents and their families.

The government has defended its response.

“We have invested over $750 million to protect residents, caregivers, and staff in long-term care homes during the pandemic, and we will continue to act on the Commissioners’ recommendations to protect our most vulnerable,” Fullerton said in a statement emailed to reporters Dec. 4.

Parkes is not alone. Many advocates and front-line workers say the government did next to nothing to prepare homes for the second wave of COVID-19. 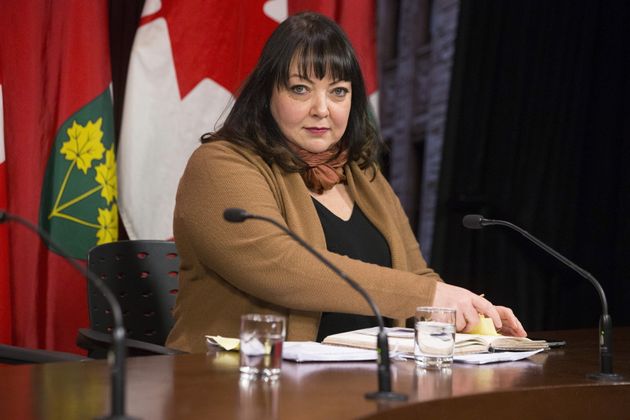 Natalie Mehra, executive director of the Ontario Health Coalition, speaks to reporters at Queen’s Park in Toronto on Jan. 21, 2019.

Natalie Mehra, executive director of the non-partisan advocacy group Ontario Health Coalition (OHC), says she tried to count how many of Ontario’s 626 care homes had “terrible” conditions this year comparable to those described in the military report.

“I got to 100 and I had to stop,” she told HuffPost at a virtual press conference.

Her group recently released a survey from 88 staff members who work at homes dealing with major outbreaks of COVID-19. Only 33 per cent said they had adequate staff.

Respondents described “extraordinary workloads” and “dangerously inadequate training,” the survey said. Some said that they were too busy to bathe and groom residents properly; others said they were struggling to feed and hydrate residents or administer medication.

“I’m furious. The families are furious,” Mehra said. “They talk about Premier Ford and his crocodile tears … He acted like he cared and nothing substantive has happened.” 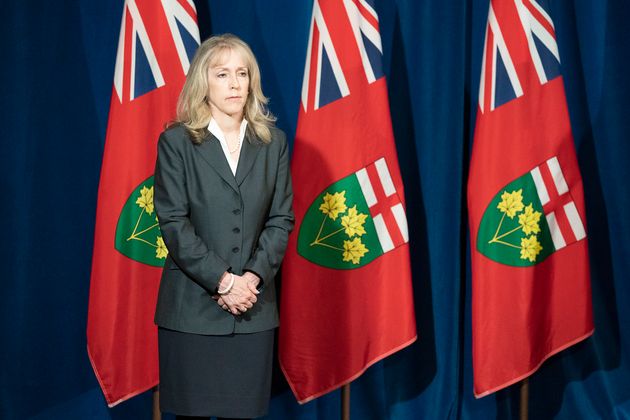 Ontario Minister of Long Term Care Merrilee Fullerton listens to questions during the daily briefing at Queen’s Park in Toronto on May 28, 2020.

Fullerton has said the ministry is making sure homes with outbreaks of COVID-19 have enough staff. But frontline workers have continued to contradict her and the media continues to report on dangerously low staffing levels at homes where dozens are dying of the virus.

“Since the beginning of the COVID-19 outbreak, the Ministry of Long-Term Care has worked directly alongside local public health units, hospitals, Canadian Red Cross, and all our health sector partners to support homes and ensure they have infection prevention and control measures in place, staffing and a good supply of PPE,” Fullerton’s spokesperson Krystle Caputo told HuffPost by email Dec. 14.

Public outrage is also directed at the minister.

The Ontario NDP first called for her to resign the day the military report came out.

One seniors’ advocacy group is now calling for her to be fired.

This is the first time the Canadian Association of Retired Persons (CARP) has called for a minister to be fired in its 36 years, chief policy officer Bill VanGorder wrote in an op-ed for the Toronto Sun.

CARP always tries to have productive relationships with the government, VanGorder told HuffPost. But this situation is so severe and the ministry’s response so ineffective, the organization felt it had no choice but to call for Fullerton’s firing, he said.

“They keep making announcements of future plans, but no current action. Surely in the nine months since this began, we’ve learned enough to make the changes that would at least help. But we’re still hearing stories of what they’re doing being absolutely inadequate.”

Front-line workers reach out to CARP or to VanGorder when he’s doing radio shows, he said, and say they still don’t have the personal protective equipment (PPE) they need.

“They keep making announcements of future plans, but no current action.”

Fullerton’s office has insisted that homes in outbreak have adequate PPE, even when confronted with accounts from front-line workers who say the opposite.

VanGorder said it’s horrible Fullerton is still supported by staff in the ministry and the premier.

“I’m sure that he is personally concerned that this is happening,” he said of Ford. “But it’s his responsibility to make sure the people who work for him, the Minister and the departments, follow through and make changes that are going to be effective in the situation.

“And that’s not happening. So we really question his leadership.”