Will Patients Be Forced to Pay For Needed Health Care? 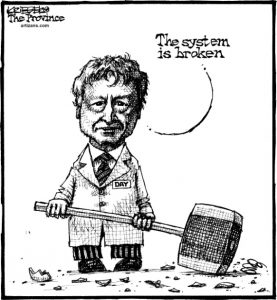 Mariel Schoof was referred to a private clinic in B.C. for sinus surgery. She was appalled when she was charged more than $6,000. So she wrote to her provincial government to have them take action. Like most Canadians, she expected health care to be provided without charge, paid through our public taxes. But the provincial government did nothing in response to her complaint.

Her experience touched off a set of legal challenges that could change the face of health care in Canada.

In provinces like B.C. and Quebec, recently Saskatchewan, and to a lesser extent, Ontario, private clinics have been taking over more and more from public hospitals. These private clinics sell diagnostics and surgeries as profit-seeking businesses. They make their profits from government contracts and, too often, from charging patients extra user fees for access to health care.

Concerned about other patients being denied care if they couldn’t afford to pay thousands of dollars in extra fees, Mariel Schoof and four other patients took the B.C. government to court for failure to enforce the laws that protect patients against extra-billing by private clinics. (Extra-billing is when doctors charge OHIP – or the equivalent in other provinces such as BC’s MSP – and then also charge patients on top. In Mariel Schoof’s case, documents filed with the court assert that not only was Mariel charged for the procedure, but her doctor also charged the B.C. public health insurance plan for the procedure.)

In response to the suit brought by the patients, the B.C. government finally tried to audit the main private clinics in question. But clinic owners wouldn’t allow the government auditors access their records. Instead the private clinics brought their own legal challenge to bring down the laws that prohibit them from levying extra charges on patients – ie. the laws that they were breaking that uphold single-tier health care (in plain language this means equal access based on need not wealth).

Eventually the B.C. government won a court-order forcing the Cambie Surgical Centre – the provinces’ largest private clinic — to let government auditors see their records. The audit, released in 2012, was damning. Nearly $500,000 in extra-billing was found within just a small sample of the procedures at the clinics. At least $66,000 appeared to involved double-billing where both the patient and BC Medical Services Plan (BC’s OHIP) were billed for the same procedure. Patients were illegally billed at rates far greater than allowed under the provincial public health care plan – in some cases up to 500 per cent more. In one typical example, a patient was billed $7,215 for services for which the public plan pays $1,288.

Undaunted, Cambie Surgical has pursued its legal challenge to bring down the laws that prohibit such extra-billing of patients. That case is going to the Supreme Court of B.C. starting today.

Unfortunately, the original case, brought by Mariel Schoof and the other former patients to stop the extra-billing, has been put on hold while the private clinics first fought the audit and now while the clinic’s case to bring down public medicare moves forward.

This is not only a story impacting B.C. residents. Across the country, the private clinics’ owners and operators are undermining public health care. Often the charges levied by private surgery or diagnostic clinics are flagrant violations of the Canada Health Act’s requirement that care be provided without financial charges to patients when they are sick and in need, and that health care be provided equally whether the patient is rich or poor. Despite the clinics pretenses, the amounts charged for surgeries and diagnostic tests are often outrageous — $20,000 or more for knee surgeries in B.C., more than $1,000 for an MRI that costs less than $350 in a public hospital, more than $1,500 for cataract surgery that costs less than half of that in a public hospital.

In Ontario, the private clinics’ owners and operators have become this century’s “snake oil salesmen” – selling all kinds of procedures and tests to make extra money. In our research, we have found that patients are routinely told that they should pay hundreds or even thousands of dollars charges for unnecessary tests and add-ons at cataract surgery clinics, for example, or “administrative” or “facility” fees charged at colonoscopy and endoscopy clinics. More often than not, patients are not properly informed that they do not need the special eye-measurement or lens, or that all needed medical care including tests, equipment and supplies that are needed to conduct cataract surgeries, colonoscopies and endoscopies are covered by our government health insurance plans (like OHIP) without any charge to the patient. The add-ons for which the clinics charge are usually unnecessary, unproven or unsupported by scientific evidence.

When public campaigns have been mounted by public interest groups such as the Ontario Health Coalition and Friends of Medicare in Alberta, we have successfully pushed back extra-billing. But as more services are handed over to private clinics, extra-billing and user fees become more entrenched. In B.C., Quebec, and now Saskatchewan, user fees for patients who have been referred to private clinics are very common.

Today, as the B.C. Supreme Court, the Cambie Surgical Centre’s court challenge to the laws that uphold single-tier health care for all in British Columbia begins, Dr. Brian Day, the owner of the for-profit clinic and strident campaigner for health care privatization, has attempted to frame the debate as though the private clinics are altruistic champions of patients’ rights and access to care. Recently, Dr. Day, who is prone to hyperbole, actually likened himself to Mohammad Ali. (In the past, he has likened Canada’s health care system to those of Cuba and North Korea.)

In the upcoming months of the trial, Canadians will undoubtedly hear truly horrifying stories of too-long waits for needed care, as the private clinics try to use the failures caused by cutbacks and poor organization to ratchet open public health care for their benefit. The private clinics will try to posit themselves as an add-on or saviours to the public health care system, rather than as a take-away, siphoning scarce resources and doctors and nurses away from our local public hospitals to higher-cost profit-seeking operations. They will try to sidetrack from the well-known horrors of private health care in the U.S. by saying that they want a European “hybrid” system. Since few in Canada know much about various European countries’ health care systems, the private clinics will try to use these messages to throw off the very obvious criticisms of the greed and corruption that we see in profit-seeking health care.

Every poll shows that vast majority of Canadians share the common value that access to care should be based on medical need, not the size of one’s wallet. Canadians believe care should be compassionate and close to home, not organized to maximize profits and only available in large cities where there is a big enough market for private clinics.

In the upcoming months we will need to raise our voices to expose the greed and inequity of the private clinics. There is no question that all of us must insist that too-long waits, inadequate care, inflexibility, and public accountability need to be addressed urgently and effectively. But private clinics would not solve these problems.

This court challenge could impact tens of millions of Canadians’ lives. It is being heard in the B.C. Supreme Court now. The B.C. Health Coalition and the Canadian Doctors for Medicare have been granted intervenor status in the trial. The B.C. government has said that it will defend single-tier medicare vigorously (though it has brought in the private clinics that have created this situation) and the federal government will also bring evidence to stop the clinics’ extra-billing. In the end, the case could be appealed to the Supreme Court of Canada. Either way, it has the potential to fundamentally change health care for Canadians. While the decision is in the hands of the court justices, there is no question that loud, sustained public demands that single-tier health care for all be upheld will help.

To help in your community, please contact Natalie Mehra, Ontario Health Coalition at 416-441-2502 or ohc@sympatico.ca .

You can donate to the B.C. Health Coalition to help fund their court intervention and campaign to protect public health care for all. Go to: http://bchealthcoalition.ca/

Here’s a backgrounder on the private clinics in B.C. http://www.ontariohealthcoalition.ca/index.php/backgrounder-b-c-private-clinics-challenge-to-single-tier-health-care/

You can read our latest report on private clinics in Ontario here: http://www.ontariohealthcoalition.ca/index.php/private-health-clinics-using-manipulative-tactics-to-over-bill-patients-ontario-health-coalition-report/

or our seminal report on private clinics across Canada here: http://www.ontariohealthcoalition.ca/index.php/private-clinics-report-eroding-public-medicare-lessons-and-consequences-of-for-profit-health-care-across-canada/