1. Nurse recruitment during the pandemic is challenging, but going reasonably well 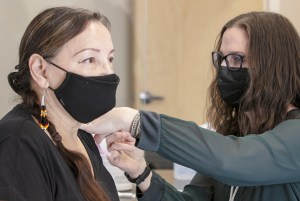 Jennifer Henderson reports on the recruitment of retired or inactive nurses needed to work in testing centres, vaccines clinics, and as contact tracers. So far, 508 nurses have stepped up.

To get the nurses ready to go back to work, the College of Nursing created a re-licensing program that Henderson says is one of the first, if not the first, in Canada. Henderson writes:

“From mid January 2021 until now, we have added 322 nurses by issuing conditional or restricted licences,” says Sue Smith, the registrar and CEO for the College of Nursing, which regulates the nursing profession. “This is unprecedented across the country. The licence is good for four months, it is free of charge to the nurse applicant, and it can also be extended by another four months.”

Nurses who have been out of practice more than five years can work in the mass immunization effort but aren’t eligible to care for patients in other settings.

Last March, when the first wave of the pandemic arrived and it looked as if more nurses would be needed, the College worked with the Department of Health and NS Health to issue temporary licenses to nurses who had been retired less than five years.

“Last May it was about making some additional nurses available,” recalls Smith. “In the past we had issued short-term conditional licences to graduates from nursing schools who had been waiting to pass their RN exams. But we had never had rapid re-licensure for retirees.”

Nova Scotia still has a shortage of nurses, even though the nursing workforce has grown by 2% a year for the last 10 years. 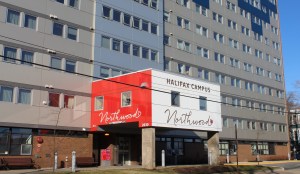 This item is written by Jennifer Henderson.

A coalition of citizen health groups from across Canada has released its proposal to the federal government aimed at getting national standards for long-term care homes enshrined in federal law.

Nursing homes are currently a provincial responsibility and are not governed or included in the Canada Health Act. Since 1984, this Act has provided standards for hospitals and financing to provinces so people can access doctors and clinics regardless of their income. Provinces that don’t adhere to federal standards around wait times for surgeries, for example, risk losing health transfer income from the federal government.

Canadians were shocked by the living and working conditions in some for-profit nursing homes in Quebec and Ontario, where hundreds of people died from the virus. In Nova Scotia, 53 people died at Northwood, the province’s largest and one of its oldest nursing homes, where bathrooms and bedrooms were shared by two and three residents.

In January of this year, Prime Minister Justin Trudeau issued Health Minister Patti Hajdu a formal letter authorizing her to work with the provinces and the Minister of Seniors to establish national standards for long-term care. But the content of those standards, and whether they should be included in the Canada Health Act (by way of amendments) or through a new stand-alone Act, remains an open question.

“We need federal funding for Long-term Care to be tied with provincial compliance with national standards and to transition from for-profit providers to the fully public non-profit system,” said Steven Staples, the policy director for the Canadian Health Coalition. The Coalition hired lawyer Steven Shrybman from Goldblatt Partners to prepare a legal analysis, which was made public during a Zoom news conference yesterday. You can find it here.

“Nova Scotians have been sounding the alarm on the crisis in long-term care for over a decade and the pandemic has highlighted the need for urgent action on staffing, infrastructure, funding, and oversight,” said Chris Parsons, provincial coordinator, Nova Scotia Health Coalition. “As the need for long-term care continues to grow in the province, having clear and enforceable national standards are critical in ensuring that Nova Scotians get the care they need and deserve.”

The legal opinion prepared by Shrybman and endorsed by a dozen health care groups across the country proposes that future amendments to the Canada Health Act or new legislation follow these Guiding Principles:

• Long-term residential care is an essential component of the Canadian health care system, and requires proper federal funding and conditionality (standards) to improve the availability and quality of care.

• The operation of provincial LTC programs must be overseen by a publicly funded, transparent and accountable public body that ensures adherence to the criteria and conditions for federal funding for such services;

• Publicly funded LTC services must be accessible and available to all Canadian residents who require such care, and be provided according to their need, not ability to pay.

• Publicly funded LTC services must be of an appropriate and high quality. Organizations and other entities that receive public funding to provide LTC must be accountable to: residents and their families, their staff, administrators of the LTC program, and to the public. This requires routine public financial and performance reporting that is audited and verified.

• The fiduciary obligation of for-profit corporations to maximize shareholder value and investor returns is incompatible with the need to treat the well-being of residents in long-term care homes as the first priority. Therefore public funding should be used in priority to support not-for-profit LTC homes with the goal of reducing the role of for-profit providers.

In his legal opinion, Shrybman expands on the reasons why the federal government should in the future tether its funding for new nursing homes only to those operated by non-profit organizations:

The need to police the profit taking proclivities of private LTC homes has led to the proliferation of detailed and extensive regulations. However, no matter how well fashioned, the imperative to take profits creates a strong incentive for private companies to find ways finesse or game the rules, as a report of the BC Seniors Advocate documents.

The collateral damage of this regulatory cat and mouse game is to impose overly burdensome regulations on non-profit and publicly owned LTC homes, depriving them of the flexibility required to ensure that all available funding is most effectively used to meet residents’ needs.

Non-profit LTC service providers also suffer from having much more limited access to the capital financing required to build or modernize LTC homes than do for-profit providers who can often access private equity capital. This explains the substantial growth in equity investment in the LTC sector.

In other words, the current regulatory and financial playing field is tilted decidedly in favour of for-profit ownership. Unless that imbalance is corrected, the endemic problems associated with for-profit ownership will persist, and worsen as current patterns persist.”

In Nova Scotia, 45% of nursing home beds are operated by private companies such as Shannex, Gem, and the MacLeod Group. The other half are operated by community or non-profit groups. Northwood Group is technically a non-profit corporation although it includes several separate companies and has assets worth tens of millions of dollars. 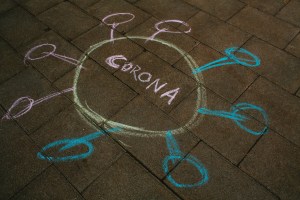 Photo by Markus Spiske on Unsplash

Tim Bousquet has the latest COVID-19 numbers and all the graphs of cases and more. Two new cases of the virus were announced on Monday. That brings the total known active cases to 20. No one is in the hospital with the disease.

Pop-up testing is scheduled for today from noon to 7 p.m. at the Halifax Central Library. You can also schedule an appointment at one of the Nova Scotia health labs here.

This morning, the province released update timelines on when Nova Scotians can expect to get their first dose of the vaccine. Tim Bousquet tweeted that out here: 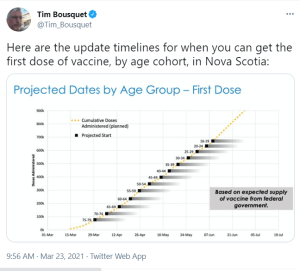 There’s a COVID briefing at 11:45 a.m. with Premier Iain Rankin and Dr. Robert Strang. Click here to watch, or on the Nova Scotia government Facebook page. 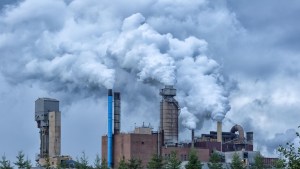 Northern Pulp missed a Feb. 28 deadline to submit a decommissioning plan so now the province will spend $19 million to dredge Boat Harbour. That announcement was made in this press release from the province on Monday.

The release says “the cleanup will begin once the federal environmental assessment process is complete and approved. The approval is expected in 2021, with the cleanup to start in 2022.”

The cleanup can’t start until Northern Pulp removes the top layer of sludge down to a 1997 baseline level. But Northern Pulp hasn’t submitted a decommissioning plan. Its deadline to submit that was Feb. 28.  That was an extension from a previous deadline of Aug. 1, 2020. As the release says, decommissioning activities can’t overlap with the remediation project. Lloyd Hines, minister responsible for Nova Scotia Lands, from the release:

We cannot continue to wait. Taking one management approach makes good sense to ensure it’s managed in a responsible way and timelines stay on track. Our ultimate goal is to return Boat Harbour, or A’se’k, to its original state as a tidal estuary. It’s a commitment to the people of Pictou Landing First Nation and Pictou County and we intend to keep it.

Joan Baxter and Jennifer Henderson have reported extensively on Boat Harbour, including here, here, here, and here. Linda Pannozzo has a fabulous four-part series on the subject called “Dirty Dealing.” And you can also search our archives for more articles on the subject using the search box on the home page. 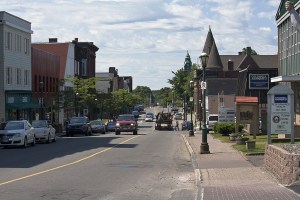 Dr. David Kogon, the mayor of Amherst, tells Jesse Cook at Global Halifax the border between Nova Scotia and New Brunswick really isn’t open unless New Brunswick drops its requirement that people returning to that province must self-isolate for 14 days.

Last week, we learned the Atlantic bubble will open sometime before April 19. But on Friday Premier Rankin announced Nova Scotia would open its border to New Brunswickers.

When Premier (Iain) Rankin announced that he was going to allow New Brunswick residents to come into Nova Scotia without restriction, it sounded well and good but unless Premier (Blaine) Higgs offers the same thing to Nova Scotia it doesn’t really impact on our ability to cross the border.

Political scientist Jamie Gillies tells Cook he thinks there could be a “coordination issue at the political level or health level.”

Something went wrong in terms of trying to do this between two provinces and having similar rules and regulations on who can travel where.

For its part, New Brunswick says it will continue to watch the COVID-19 case numbers and follow public health advice.