Save Public Medicare!
Urgent P3 Hospital Update
Contents
• Upcoming Plebiscites & Pictures from the Current Campaigns
• Plebiscite Results in Hamilton & Cross-Ontario Totals
• Updates on P3 projects in Sarnia, Quinte, Trillium, London St. Jo’s and Sudbury, Woodstock, North Bay and Sault Ste. Marie What is Being Accomplished? The Good News and The Bad News
• The Ontario Federation of Labour rally against P3s and Privatization Saturday, June 3 in front of Queens Park
• 2 High Profile P3s Collapse and the Province Loses Public Control of Private Information in the 407
• Registration form to help out on voting day of plebiscites. 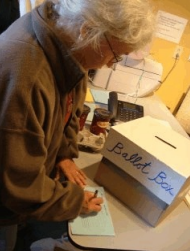 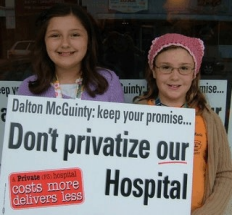 55,881 Ontarians So Far Have Voted to Keep Hospitals Public. In its campaigns to date, the Ontario Health Coalition working with local coalitions has garnered almost 56, 000 votes against P3 privatization of our hospitals. “We now have an astounding 56,000 votes against P3 privatization of our hospitals from four communities across Ontario,” said Natalie Mehra, Director of the Ontario Health Coalition. “We are gearing up for the next several community-wide votes very soon. We will continue city-by-city to make sure that Ontarians know McGuinty plans to break his election promise to stop the P3 privatization of our hospitals.” “Our vote has given people an opportunity to send a strong message to our politicians that the health system is ours and we expect them to operate it in our interests, not in the interest of profit-seeking businesses. The results in this voluntary vote are much bigger than any petition in recent memory. The McGuinty government and local Liberal MPPs ignore this significant opposition to the P3 hospitals at their own peril.” The plebiscite in Hamilton garnered enough votes to be of significant concern to local elected officials. In the last provincial election, the winning Hamilton MPPs got between 15,000 and 24,000 votes each (Liberal MPP Marie Bountrogianni was elected by 23,524 votes in the last election).

Updates on P3 projects in Sarnia, Quinte, Trillium, London St. Jo’s and Sudbury, Woodstock, North Bay and Sault Ste. Marie
What is Being Accomplished? The Good News and The Bad News
Province Puts First New P3 Hospital To Bid – Some Hospitals More Private Than Others

The bad news: the McGuinty government has begun the tendering process for a host of new privatized P3 hospitals. Requests for Qualifications (RFQ) to assess which companies are qualified to bid on the hospitals have been put out for: Sarnia, Quinte, Mississauga Trillium, London St. Jo’s, Sudbury and Sault Ste. Marie. After the RFQ processes 3 – 4 bidders will be shortlisted and invited to participate in the next stage. The next stage, Requests for Proposals (RFP) in which the qualified bidders are invited to submit bids has started in North Bay. The bidding will close next month after which the provincial government, hospital board will choose a finalist bidder. This finalist will be announced. Then they will begin to negotiate the deal with the for-profit consortium. This will take months. Then, if the deal goes through, they will sign financial close (the closing of the deal) and begin construction. Approval to go ahead and start planning P3 hospitals has been given in Woodstock and at the Ajax-Pickering site of Rouge Valley. These have not begun either of the RFQ or RFP processes and are a few years away still. It looks like the provincial government may try to push through financial close on 1 – 6 projects before next fall’s provincial election. The good news: our pressure is working to reduce the number of services included in the deals for long term privatization. In Brampton and Ottawa the P3s privatized all of the services from portering to cleaning, from food to maintenance covering hundreds of millions of dollars and hundreds of employees. In North Bay and Sault Ste. Marie, the P3s so far include privatization of maintenance and some of the systems but fall short of privatizing all of the additional services such as cleaning and housekeeping. In the RFQ for Sarnia, Quinte, Trillium, London St. Jo’s and Sudbury, the financing, build, and design are rolled into the P3 deal, but so far no additional services are slated for privatization. This is a good start, but the cost of the more expensive private financing in all of the projects will siphon money away from hospital and community health for years to come, if we do not stop these deals. The services included in the privatization for North Bay and the Sault will be lost to public control for 20 – 30 years. In addition, the RFP (tender) is being kept secret for North Bay despite many many promises of transparency etc. from Minister David Caplan. The RFP contains the full list of services to be privatized. It is the provincial government’s intention to keep this, the extent of the land privatization and other business deals included in the P3 plans secret until at least the deal is closed. We will be protesting this very publicly in the near future. 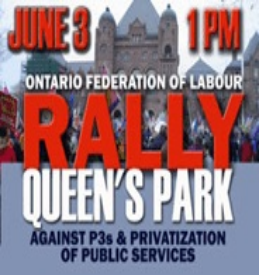 The Ontario Federation of Labour organizing a rally against P3s and Privatization
Saturday, June 3 at 1 pm
In front of Queen’s Park in Toronto.
The OHC is encouraging all of our members to support the rally.

.Ontario Health Coalition members will gather at the
southern part of the circle in front of Queen’s Park at 12:30
pm. We will meet beside the southernmost statue. See you
there!

Two More P3s Collapse &Province Loses Battle for Control over Hwy 407 P3This has been a bad month for P3 proponents. The high-profile P3 at Union Station in Toronto collapsed, the province lost after a string of court appeals to try to gain control over the 407 P3 deal and the Penetanguishene prison privatization has been ended.

The Union Station P3 failed at the end of April after three extensions in the negotiations with the private for-profit partners. Public interest proponents like John Sewell were delighted as the plans that emphasized commercial development over transportation needs were scrapped. The P3 had been dogged with typical P3 problems — secrecy, lack of public accountability, legal disputes and lengthy time delays. Ultimately the consortium including several British P3 companies and OMERs real estate wing crumbled.

Following the collapse of the union station deal, the P3 at the Penetanguishene prison is being brought back into public non-profit control, the provincial government announced at the end of April. Citing poor quality in heathcare services and a higher rate of recivitivism, the province has ended the private contract and restored public service in the province’s only privatized jail.

Macquarie Infrastructure Group (the same company that is buying up Ontario’s long term care beds), operators of the province’s most infamous P3 – the 407 ETR – have signed a truce with the provincial government ending a string of court appeals that began in 2004. The provincial government agreed to give up its attempts to control toll hikes and will withhold drivers’ licenses from people who are behind on their bills to the for-profit consortium. Despite face-saving press releases, no one has been able to name what the province won for the people of Ontario in this sour end to a long court battle. The 407 had raised tolls by 350% since 1997 for off-peak car drivers and by about 50% for peak hours, according to a Canadian Press article in July 2004.