(Trenton, Ontario) – At a major regional rally today in Trenton, hundreds gathered to deliver a strong message to Lou Rinaldi, the senior Liberal MPP for the region. The Take Back Our Hospitals Rally, organized by the Ontario Health Coalition and Our TMH (Trenton Memorial Hospital) brought patients, seniors, veterans, health advocates and hospital workers, health professionals and nurses, from across the southeast region to converge on Centennial Park in Quinte West. They asked Rinaldi to take a firm message back to the Wynne government in Toronto: local community hospitals across Ontario can’t take any more cuts.

Currently, the health planning body for Southeastern Ontario is planning a major restructuring of all the hospitals from Perth & Smiths Falls to Brockville to Trenton and every town in between. The plan is to cut services and centralize them into fewer towns, forcing patients to travel further for the care they need. But these hospitals have already faced year after year of cuts. Ontario is now in the eighth year of real-dollar budget cuts to Ontario’s community hospitals. This is the longest stretch of real-dollar hospital cuts in our history and is a result of the Ontario government’s budget choices. The Trenton Memorial Hospital is threatened with the most devastating hospital cuts in the entire region. It is slated to lose virtually all surgery and at least half of the remaining acute care beds. This after years of devastating cuts. It is for this reason that Trenton was chosen as the location for the regional day of action.

But other communities across the region are also facing unbearable cuts. Perth and Smiths Falls are threatened with another round of service losses; Brockville has been hit with two rounds of cuts already this year and is in danger of even more; Picton’s hospital is only a shell of its former self, having been decimated by cuts; Lindsay is slated for serious surgery cuts; Northumberland Hills Hospital is facing a new round of restructuring that will result in more cuts if not stopped; Kingston General Hospital is already in “Code Gridlock” for months at a time, meaning it is full and cannot take any more regional patients; and the Minden Hospital is threatened with complete closure.

“Southeastern Ontario is sending a message today, that Premier Kathleen Wynne continues to ignore at her peril,” said Natalie Mehra Executive Director of the Ontario Health Coalition. “Our community hospitals are the beating hearts of our towns, and the damage to them needs to stop. It is far beyond time that the Ontario government stop cutting our hospitals. As we speak, the Ontario government is drafting next spring’s budget. Now is our chance to impact their budget choices, including improving the funding levels for our community hospitals, which now rank at the bottom of the country.”

“We need stability in our community, we need a hospital that is not facing constant cuts. We are supporting the staff that are in a precarious situation as they face job losses and the patients, whose safety we fear will be compromised by continued cuts. We appreciate all the support of the Ontario Health Coalition and the local coalitions that have brought their energy and support. We feel confident locally, that with this support our message can’t be ignored at Queen’s Park and that the strength of today’s showing should help turn the tide,” said Betty Clost, member of local citizens’ group Our TMH. 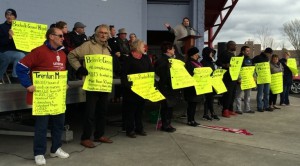 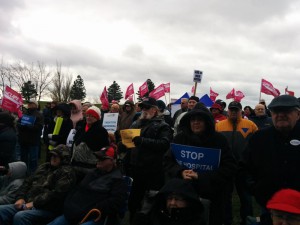 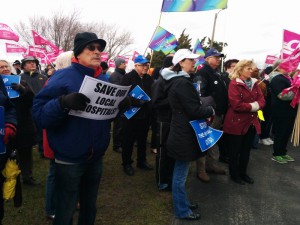 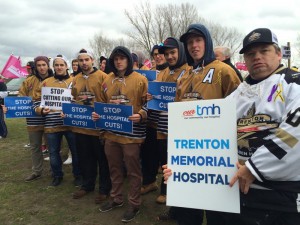