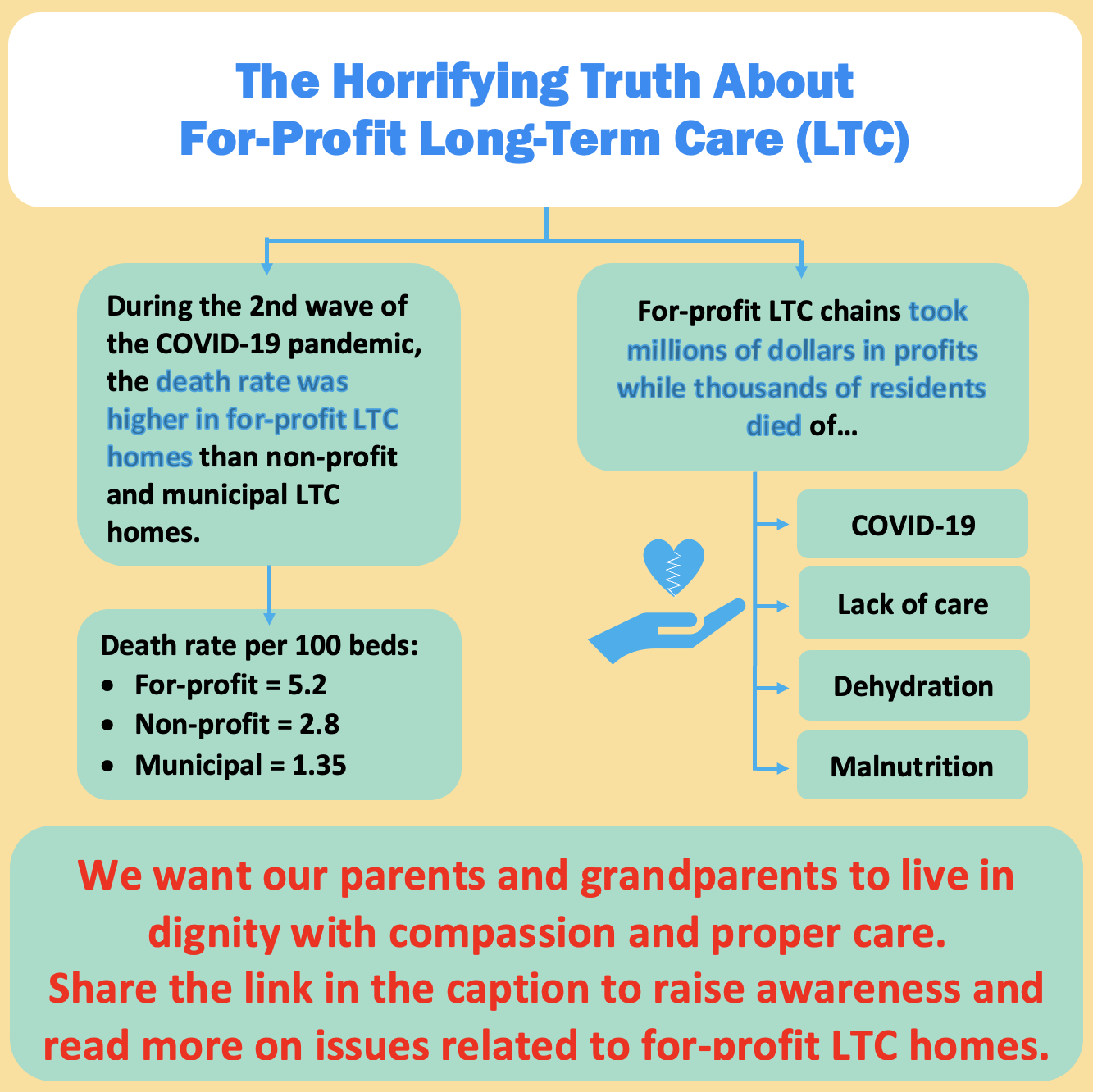 Impacts of the COVID-19 Pandemic

As of November 29, 2021, 4,023 residents died as a result of COVID-19 alone. Others died of malnutrition, dehydration, and neglect due to lack of care as COVID-19 rampaged through their long-term care (LTC) homes. Many of the COVID-19 related deaths in LTC homes are also associated with:

The elderly deserve better. Many residents require care that takes time, but currently, each resident only receives about 2.7 hours of care daily, far less than a safe level of care which would be at minimum 4-hours per resident per day.

The poor quality of care in LTC homes is worse in for-profit LTC homes.

Ultimately, research has shown that ownership is a significant factor in the difference in quality of care in LTC care homes, where LTC homes and their residents of for-profit ownership face poorer quality of care.

There is no care without staff. Inadequate staffing levels are one of the many factors contributing to the high rate of COVID-19 and deaths of residents in for-profit LTC homes.

Low levels of staff have been an ongoing crisis prior to the pandemic. Unsafe staffing levels are related to the fact that staff that work in for-profit chains are paid less. For-profits also hire more casual and part-time staff to avoid providing staff benefits. At the same time, shareholders and investors receive tens of millions per month in profits. As cited in the Ontario Legislature in 2007, Karen Sullivan, the executive director of the for-profit LTC lobby group, stated that for-profit LTC homes earn profits in part from the low wages for staff and charging higher fees to residents who have private rooms.

Staff also work in multiple health care facilities to compensate for the low wages from working in LTC homes. Many staff quit because of the working conditions, low staffing levels, and unlivable wages of care. Two systemic reviews examined one Canadian study and found that staff working under for-profit ownerships had higher staff turnover compared to non-profit ownerships. Understaffing is also correlated with higher rates of injuries for staff. According to a study that examines staffing and worker injury in LTC homes, there is a proportionate relationship between staffing levels and the health and well-being of staff.

Ultimately, unsafe working environments and understaffing in for-profit LTC homes lead to the harm and deaths of residents. Care is not possible without staff, and the working conditions for staff in LTC homes are the conditions of care for the residents.

In one example of a for-profit LTC home, Orchard Villa, there was a terrible outbreak with at least 70 residents who died as a result of COVID-19 alone, and others died of dehydration and malnutrition. The military, who were sent in to help, found terrible living conditions at the homes, including:

A study that examined the admission experience of residents into for-profit LTC homes compared to non-profit LTC homes found a disproportionate relationship to the quality of living conditions and stress. For-profit facilities have fewer services and provide lower comfort and security, which increases residents’ stress levels.

What can you do?