Day of Action Against Healthcare Cuts and Privatization 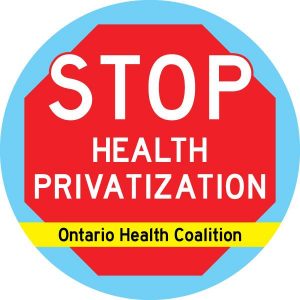 The Ford government has rammed a radical health restructuring law through the Legislature in an unprecedented undemocratic process, refusing to hear from thousands who applied for hearings and sent in submissions. All amendments prohibiting privatization were voted down by the Conservatives. The new law gives the Minister of Health and the government’s appointees in the new “Super Agency” the ability to force privatization of services as well as to merge, transfer services from town to town and from provider to provider, and close down services including public hospitals, long-term care, home care, community care, mental health, primary care, palliative care, cancer care, eHealth, air ambulance, laboratories and others.

In addition, the list of healthcare cuts under the Ford government is mounting:

The Health Coalition is mobilizing for a massive Healthcare rally outside the Ontario Legislature next week on Tuesday April 30 at noon. The rally is expected to draw thousands concerned about OHIP cuts, hospital cuts, privatization, mergers and centralization of healthcare services. •

It has been done before and it resulted in enormous costs, not savings, and it compromised services. This was the message of the Ontario Health Coalition in reaction to the growing array of healthcare services that the Doug Ford government plans to restructure and cut. The coalition released their tally of Doug Ford’s healthcare cuts to date:

“The current EMS system in Ontario was created by Mike Harris’ restructuring,” noted Natalie Mehra, executive director of the Ontario Health Coalition. “The evidence from that round of restructuring is that costs grew dramatically post-restructuring.”

The coalition is concerned that already there are problems of slower response times in rural areas due to long travel distances, and inadequate numbers of ambulances available in urban centres due to crisis-level hospital overcrowding and paramedic costs in long offload delays. The restructuring plan does not address any of the causes of too long EMS response time, it does not ameliorate services even where there is evidence of significant need.

“Cutting and centralizing the ambulance services down to ten giant regions means that smaller rural and northern communities will be lesser priorities and risk their service levels,” she warned.

“Severe cuts amounting to almost one-third of provincial funding for public health threatens vital local services including food and water safety, infectious disease tracking and prevention, immunizations, prenatal training and safety, overdose prevention, safe needle and biohazard programs and many others. The Ford government has not explained how these services are supposed to be provided for at one-third of the cost,” said Ms. Mehra.

The Ford government is now clearly embarking on the most aggressive and radical healthcare restructuring that Ontario has ever seen, warns the Ontario Health Coalition. The Mike Harris government hospital restructuring cost $3.9-billion, according to the Provincial Auditor General, to cut $800-million from public hospitals. It led to for-profit privatization and new user fees for an array of services. The costs were never recovered and many of the current problems that we face in healthcare can be traced back to the last two rounds of restructuring.

“Again, restructuring itself has proven to be enormously costly, taking billions of public dollars away from services to lay off healthcare staff, move buildings, rename services, create new boards, renovate buildings and so on,” concluded Ms. Mehra. “Mr. Ford has taken what Mike Harris did and is now doing it again on a more radical, more massive scale. But the public is livid about the consequences of the last two rounds of restructuring. Ford seems to be oblivious to the fact that the last restructuring siphoned billions of dollars away from patient care and led to a gutting of services particularly in medium and smaller communities across Ontario but also impacting cities negatively.”

“Mr. Ford has no mandate for any of this. Not one of the cuts and none of the plans for massive restructuring, mega-mergers and service closures and transfers was ever mentioned in the election. The public has never been consulted,” said Ms. Mehra. “Instead the government is now covering by holding invitation-only ‘engagement’ sessions with government-funded managers who cannot speak freely, and in any case are not real consultations by any normal criteria.”

The truth is that the plan to cut, restructure and privatize healthcare has been hatched in secret with a set of advisors and insiders, a number of whom have private interests and many of whom have been wrong before and bear significant responsibility for many of the problems we now face. We are planning mass protests and escalating actions in response and we demand that Mr. Ford stop his high handed undemocratic destruction of services and removal of local control over healthcare services that our communities have spent more than 100 years building.

The coalition has called for a mass rally at Queen’s Park, outside the Main Legislative Building on Tuesday, April 30 at noon. •