June 23 update: A recording of the Town Hall meeting can be found here. 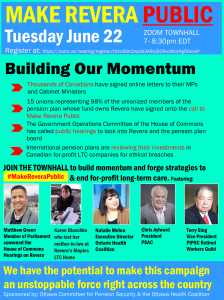 Since it’s launch in May 2020, the campaign to ‘Make Revera Public’ has been growing and gaining strength. As Revera’s ownership by the federal crown corporation and pension fund known as PSP Investments becomes more widely recognized, the demand to transfer Revera’s tragically failed for-profit long-term care facilities into publicly owned homes grows and gains momentum. Thousands of Canadians have now signed online letters to their MPs and cabinet ministers, and hundreds have attended online events and Town Hall meetings dedicated to this issue.

This momentum was recently accelerated when an open letter endorsing the call to “Make Revera Public” was published on April 16, 2021, co-signed by 15 of the unions representing federal public service workers. These unions collectively represent over 98% of unionized federal government employees, making it clear that this demand has an unprecedented level of support from federal employee unions.

Please join the Ottawa Committee for Pension Security and the Ottawa Health Coalition for a jointly-organized virtual Town Hall meeting on Tuesday, June 22nd, 7:00pm – 8:30pm. This event will be dedicated to building further on this momentum and exploring strategies for making Revera public as part of the larger effort to get profit-making out of the LTC system altogether. We believe that we have the potential to make this campaign an unstoppable force right across the country.