Click here for a petition to stop the plan to give a new 30-year license & an expansion of 87 more LTC beds to Orchard Villa.

Pickering/Durham – Rain or shine, outraged families and community members will be outside Orchard Villa, a for-profit long-term care home in which more than 200 residents and more than 100 staff were infected with COVID-19 and 71 residents died, where the Ford government is proposing to give the owners a new 30-year license and 87-bed expansion.  In addition to those who died as a result of the virus, families report residents died of severe malnutrition, dehydration and neglect. The long-term care home is part of the Southbridge chain of for-profit homes. The Toronto Star found that among the for-profits, which have far higher death rates than the public and non-profit homes, Southbridge had the worst record.

What: Protest of Ford government’s plans to give a new 30-year license and expansion to LTC home Orchard Villa, despite a trail of death and suffering at the home owned by the for-profit chain with the worst death rates according to the Toronto Star’s analysis. This will be a large protest featuring family members of residents as speakers, along with key advocates.

Orchard Villa’s record is hair-raising. When the military went into the home, they found that the home had cockroaches and insects, it smelled of rotten food, hydration schedules were not followed, residents’ mattresses were put on the floor to prevent them from standing up and walking around. The armed forces also found residents without linens on bare mattresses, poor PPE and infection control practices, food and important belongings placed beyond residents’ reach. The families who lost loved ones in the home testified before the Long-Term Care Commission about severe overcrowding, failure to cohort residents who were infected to protect those who were not, malnutrition and weight loss, failure to bathe, untended falls, failure to provide care, and egregious neglect and harm as a result of poor management and desperate levels of understaffing. After the local hospital took over the home’s management, their spokesperson reported to the media the home had dropped to only 20% of a full staffing complement. Families describe calling repeatedly but no staff would answer the phone. They banged on windows, desperate to get water for their ailing loved ones. Inspection reports prior to and through the pandemic show a litany of violations and failures.

“Long-term care homes are funded by the public and the residents and they are supposed to care for the vulnerable. In every regard Orchard Villa and their corporate owners Southbridge failed our families,” said Cathy Parkes of the Families of Orchard Villa. “We, the families are outraged that the Ford government plans to give Orchard Villa another license and an expansion and we will do everything in our power to stop it.”

“The owners of this long-term care home have never been made accountable in any way for the terrible suffering of the residents and families,” said Natalie Mehra, executive director of the Ontario Health Coalition. “The Ford government could have fined them. It could have revoked their license. It is despicable that instead the Ford government is actually proposing to reward them with a new 30-year license and expansion.”

NO MORE profiting from pain, substandard care, licenses to neglect

Provincial guidelines will be followed

The residents & families of Orchard Villa have suffered enough. For-profit chain Southbridge owns this long-term care home where 71 residents died of COVID-19 and others died of dehydration, starvation and horrific neglect. There has been NO accountability for the corporate owners, whose LTC homes have the worst death rate in Ontario and now Doug Ford has given preliminary approval for not only a new license for 30-years but also an expansion!

We intend to STOP Doug Ford’s plan to reward the worst for-profit LTC corporations with another generation of beds and licenses and insist that long-term care be operated in the public interest on a non-profit basis.

All Ontarians, we need your help.

We will honour those whose lives were lost and who have suffered so much by making sure this cannot go on.

Internet shareables are below for your use. You can paste them into your Facebook, Twitter, and other social media along with the details above. 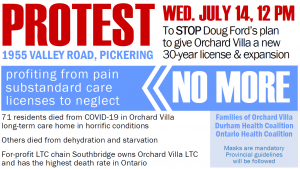 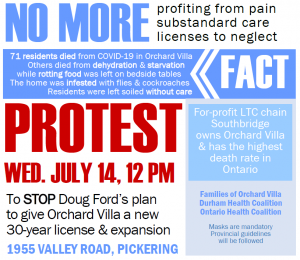