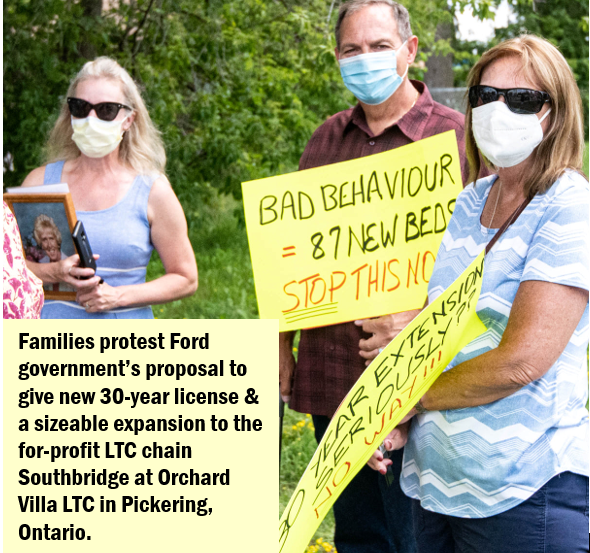 The Ministry of Long-Term Care is reviewing a proposal from Southbridge Care Homes Inc. (“Southbridge”) for a 30-year license to redevelop, expand and operate the Orchard Villa long- term care home in Pickering, Ontario.

You have asked for our opinion about the lawfulness of a decision by the Director to approve Southbridge’s application.

Orchard Villa had one of the worst records among long-term care homes during the COVID-19 pandemic. A majority of its residents contracted COVID, and at least 70 residents died as result. Orchard Villa was the first home in Ontario to be subject to an order that the local hospital take over management, and was one of five homes where the Canadian Forces were brought in to provide humanitarian relief. Hospital staff and Canadian Forces officials have documented the many egregious and repeated ways in which Orchard Villa residents failed to be provided with even rudimentary, let alone proper care.

The testimony of Orchard Villa families, and the record of Ministry inspection reports make it clear that many of these conditions predated the pandemic, and persisted during its second wave.

It is in this context, Southbridge is seeking a 30-year license to rebuild and expand the Orchard Villa long-term care home.

Before the Director can approve a new license under the Long-Term Care Homes Act, 2007, or give an undertaking to grant a new license, section 98 of the Act requires the Director to determine that Southbridge is “eligible” to operate the home. The decision is to be based on the applicant’s past record, and asks whether the licensee is “competent” to operate the home, and in particular whether its “past conduct … affords reasonable grounds to believe” that the home will be operated “with honesty and integrity” and “not … in a manner that is prejudicial to the health, safety or welfare of its residents.”

In addition, the consultations conducted by the Ministry on the Orchard Villa application failed to meet the procedural fairness standards required by law. Participants reported being prevented from asking questions or offering comments about Southbridge’s past and current record at Orchard Villa, despite this being central to the Ministry’s decision under the Act. In our view, the failure to conduct proper and fair consultations provides another justification for a Court to quash any decision approving Southbridge’s application.