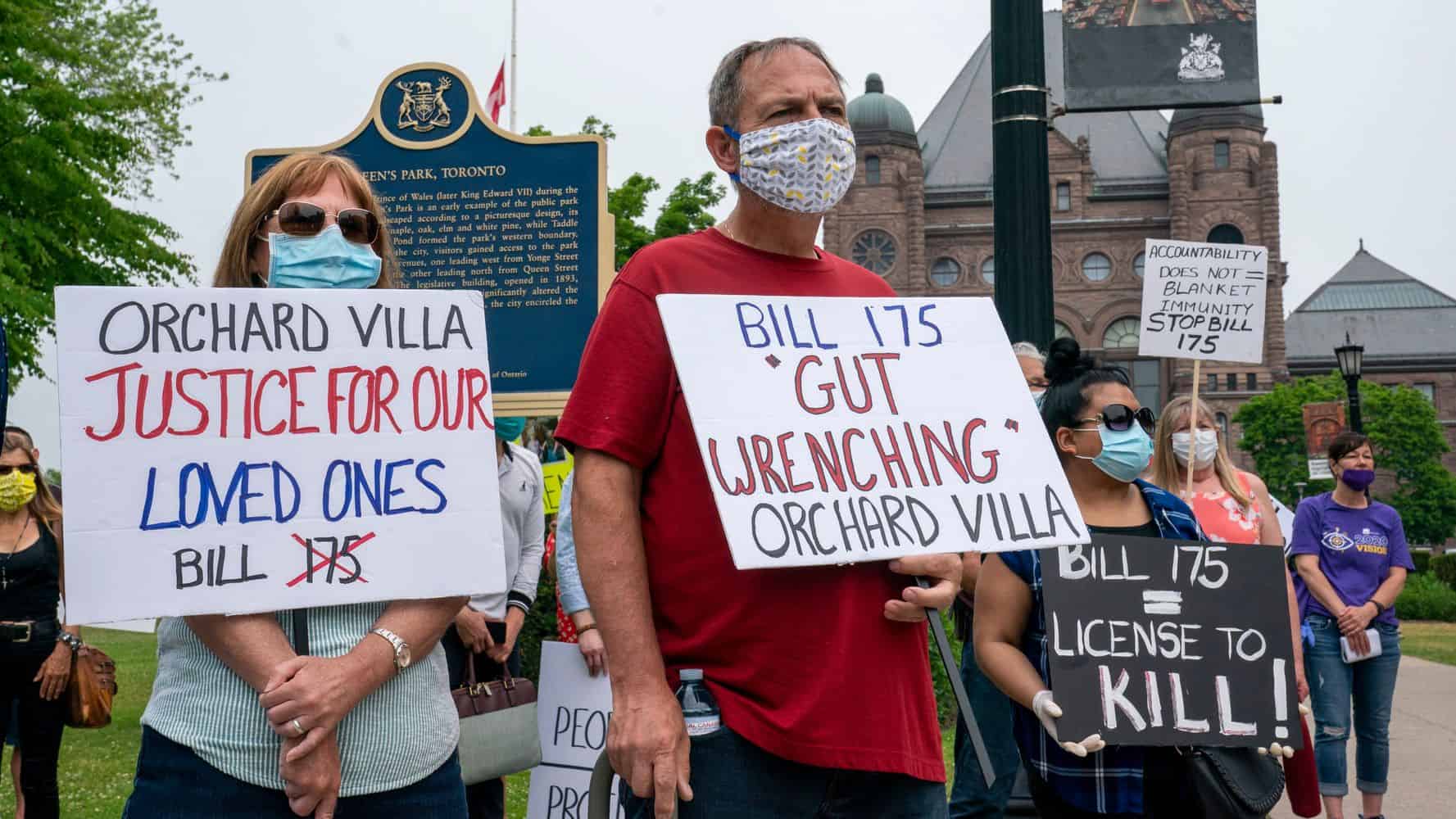 The long saga of Orchard Villa, a long-term care (LTC) home responsible for the death of 85 of its 230 residents during the COVID-19 pandemic, continues with increased opposition to the facility’s request for a 30-year license extension.

Opposition NDP leader Peter Tabuns, LTC critic Wayne Gates and Oshawa MPP Jennifer French penned an open letter to the Ministry on Long-Term Care to oppose the licence extension and increase in the number of beds.

“For the dozens of family members whose loved ones needlessly suffered and died as residents of Orchard Villa due to the home’s failure to keep them safe during the COVID-19 pandemic, the prospect of Southbridge being granted a new, 30-year license is unjust and disturbing,” the MPPs wrote.

The NDP and resident advocacy groups have long accused the Doug Ford government of rewarding “bad actors” – for-profit companies who mismanaged the COVID-19 pandemic resulting in hundreds of needless deaths. The government has claimed instead that investing in these companies provides better care to residents.

One such company is Southbridge Care Homes which operates 37 LTC homes across the province including Orchard Villa. While Ford promised early in the pandemic to form an “iron ring” around LTC facilities, they were home to a greatly disproportionate death and infection rate.

This was even more dramatic when for-profit facilities were compared to not-for-profit and publicly owned homes. The Ontario Health Coalition found that the province-wide average was 5.2 deaths per 100 beds in for-profit homes, 2.8 in 100 in non-profit homes and 1.35 in 100 in public homes during the first two waves.

Orchard Villa in particular far exceeded this rate. Over the pandemic, they lost 85 residents total. More than 70 of them died directly of COVID-19, but still others were lost to negligence, dehydration and starvation. In one case a resident choked to death because staff fed them improperly.

This is 36 per cent of their 230 residents. Across the board Southbridge lost nine per cent of its residents, the highest rate of any for-profit chain.

The state of Orchard Villa and four other homes across Ontario got so bad the Canadian Armed Forces (CAF) and the Red Cross were called in to support the staff.

“While the revelations in these reports were shocking to many Ontarians, multiple family members of residents told media that they were not surprised. Before the pandemic, Orchard Villa had a Level 3 compliance history, the second-worst designation the ministry assigns to long-term care homes,” the MPPs said in their letter.

These families have taken numerous steps to get justice for their families. A class-action lawsuit remains underway represented by lawyer Gary Will, who found the Ministry of Long Term Care investigated Orchard Villa 19 times from 2014-2019, resulting in 65 written warnings, 32 voluntary plans of correction and 13 compliance orders, with three matters to the Director.

“Orchard Villa was a family run facility up until 2015.  At that point it was sold to Southbridge Care Homes Inc. There was a notable decline in care after 2015 according to many residents and family members of residents from that time forward,” Will said on his website.

A decision on Orchard Villa’s request is expected soon.