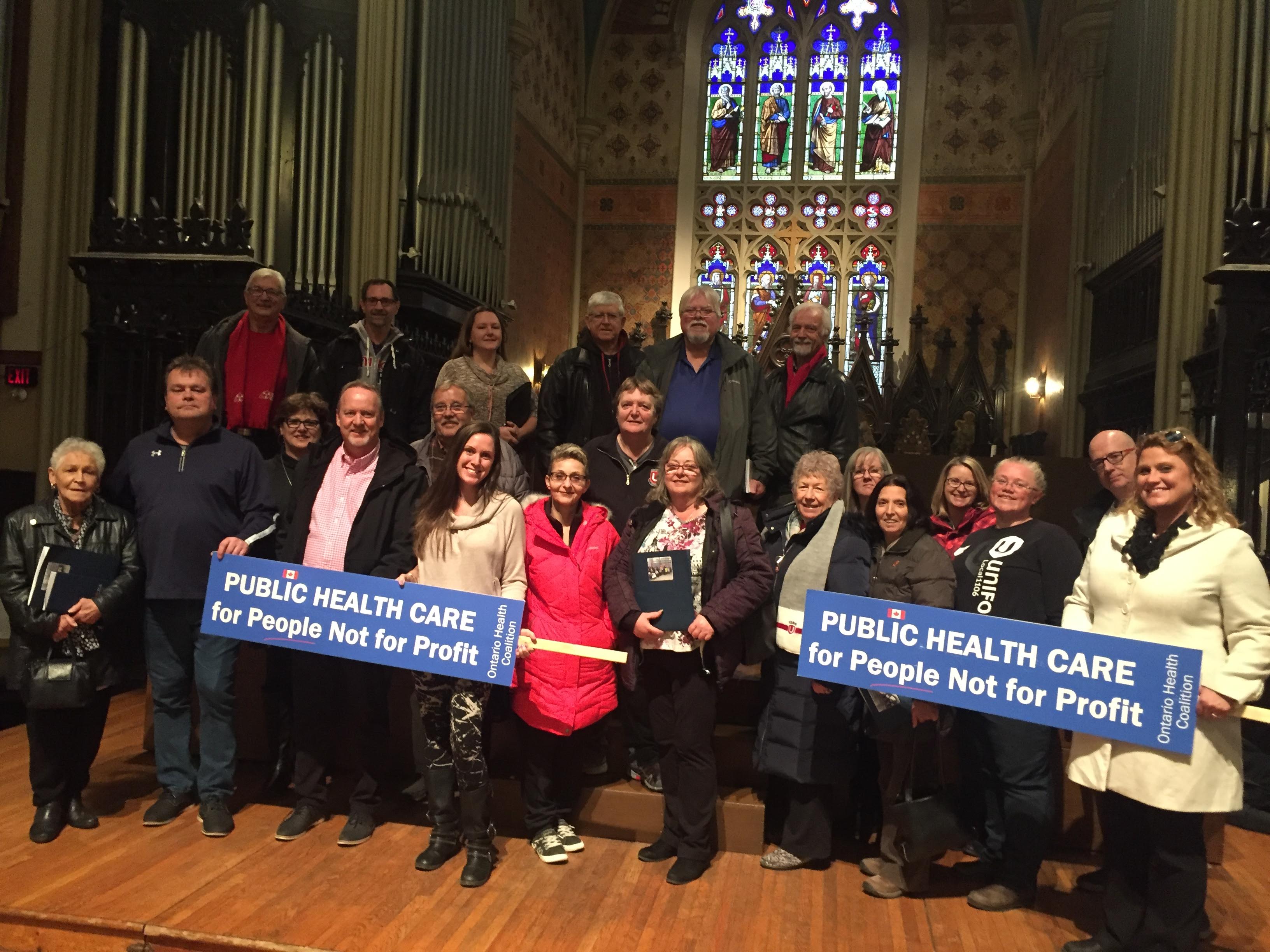 The Ontario Health Coalition’s Annual Assembly was held this past November. The Assembly included insightful discussions on the future of healthcare funding, privatization, cuts to our services, and future plans. The list of provincial health care cuts, closures and policy changes by the Ford government were discussed in great detail by Natalie Mehra. Doug Allan touched on the Ontario budget and how health care funding has changed over the years in his presentation. The rise of for-profit labs and how they operate were brought up in Ross Sutherland’s presentation. All three presentations can be found below.

There were also report-ins from various local coalitions during the assembly on their accomplishments over the past year.

Ottawa: The local coalition participated in municipal budget consultations, held a forum for health care topics during the federal election, and played a large role in organizing the rally that took place in Ottawa on December 7.

Peel: The coalition has been promoting the municipal council resolution in three municipalities in the region.

Peterborough: A federal forum with candidates was held in the lead up to the federal election, participated in both the April and November rallies in Toronto by organizing people to come out to each event, and helped to pass the municipal council resolution in Peterborough.

Kawartha Lakes: The coalition has been working hard to stop the local hospital from merging with Peterborough hospital, stop their attempts to re-define the term hospital and the type of care they would be required to provide, and stop the hospital from changing its way of governance to eliminate community membership.

London: An all-candidates’ debate was held in the lead-up to the federal election and the coalition was able to put public pressure on and help defeat the conservative candidate that avoided the debate.

Waterloo: The coalition has been picketing weekly outside various conservative MPP offices on a rotational basis, a presentation was made to the regional council regarding Public Health Unit funding, and a disapproval notice was sent by the council to the provincial government in April.

Toronto: The coalition has worked with Councillors Joe Cressy, Kristyn Wong-Tam, and Mike Layton to develop a campaign to get petitions signed, was involved in the press conference in which 100 doctors opposed health care cuts, and assisted with the Toronto rally that took place in November.

Sudbury: A petition with over 7,000 signatures was presented to the legislature calling for increased funding for Health Sciences North which led to some additional funding and a bus was organized for the November rally in Sault Ste. Marie.

Hamilton: The coalition helped organize the October International Day for Older Persons event in the area, participated in both the April and November rallies in Toronto, and were regular participants in the Seniors Advisory Committee and the Hamilton Council.

Scarborough: The coalition worked with CUPE local 79 to protest cuts in Toronto, worked with the Toronto Health Coalition on their petition, was involved in the Save the Grace campaign to prevent the closure of multiple hospital wards, participated in both the April and November rallies in Toronto, and is monitoring the development of Ontario Health in the area.

Thunder Bay: A letter to the editor was created to help inform the public about the current status of health care in Ontario and is home to the federal health minister, Patty Hajdu.

Dryden: The situation in Dryden’s hospital is dire, with under 50 beds, nurses that are forced to monitor over 10 patients per person, and the poor treatment of health care professionals and people in long-term care

Kingsville: The municipal council resolution was passed unanimously in Kingsville and work has been done on getting it passed elsewhere in the region.

Click here for the briefing note on Ford’s cuts