Academic leaders, democracy advocates, patient advocates, front-line care workers and doctors are all speaking with one voice when it comes to the leaked health care omnibus bill that has secretly been planned by the Ford government for months: if passed, it would cause health care chaos that will last for years. Speaking at a Queen’s Park press conference this morning, representatives called on the Ford government to rethink their plans; to rebuild capacity in our public health care to meet population need and consult with Ontarians in a proper and meaningful democratic consultation process about the future of our health care system, rather than engaging in massive restructuring and privatization.

The leaked omnibus health care bill creates a new “Super Agency” by merging 14 Local Health Integration Networks, Cancer Care Ontario, Health Quality Ontario. It also gives new extraordinary powers to the Minister and the Super Agency to privatize significant portions of health care and to facilitate the mega-mergers of health care providers such as hospitals, long-term care homes, home care, clinics and so on. The legislation drops public interest protections from the previous LHIN legislation including requirements for open board meetings, appeals of restructuring decisions, principles to guide decision making, equity, a requirement to plan to meet population need for health care and others. It has vast scope and far-reaching consequences. Put in context, the leaked legislation impacts millions of patients; hundreds of thousands of doctors, nurses, health professionals and support care workers; the entire cancer care system; 262 local hospitals; 629 long-term care homes; all of home care; more than 1,000 clinics; Ontario’s organ donation system; our quality tracking system, and more. 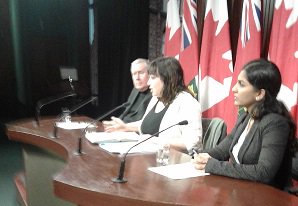 “The leaked health care legislation is an omnibus bill that would rescind and amend dozens of major pieces of health care legislation. It been created in secret behind closed doors with a plan to drive it through the Ontario Legislature and begin implementation at breakneck speed,” said Natalie Mehra, executive director of the Ontario Health Coalition. “It is the blueprint for the creation of a super bureaucracy that is charged with facilitating mega-mergers, service movement, transfers, closures, privatization: essentially restructuring on steroids. The evidence from past experiments that were much smaller in scope cost billions of dollars, taking money away from care that will never be recovered. Ford’s plan will be enormously costly, destabilizing and damaging just when we need a government that will rebuild not destroy public health care.”

“In a health care system that is badly under-funded and under-staffed, it is incomprehensible that the Ford government would embrace another wave of hugely expensive and inefficient restructuring, taking money away from care. This legislation carries with it huge job loss implications. It is designed to create a market for privatization of clinical and other services,” said Michael Hurley, president of OCHU/CUPE.  “Those of us working in the health care system, the public and the staff have not been consulted at all about these very complex and far-reaching plans. The workforce will, with the public, resist any attempts to privatize health services.”

“If challenges are found within the public health care system, the government should be working with health care providers, researchers and the public to seek improvements within the public system, rather than further fragmenting it as is clearly their intention,” said Dr Ritika Goel, a family physician working in Toronto and board member of Canadian Doctors for Medicare. “It is unclear how the creation of a ‘Super Agency’ will make care more connected to the communities in which patients live. Reorganization and integration require a lot of trust and capacity. But with no consultation with front line health care professionals or patients currently navigating the system, it is hard to see how that trust will be built.”

Because the plan is to create a market for privatization, according to the leaked omnibus bill, the government will tender services, inviting public non-profit and for-profit companies and health care entities to apply to merge or take over other services. In one part of the province we might see for-profit long-term care homes take over public convalescent care or chronic care, in another, a large hospital may try to take over home care, in another multiple hospitals could merge in mega-mergers including for-profit hospitals or clinics. In addition, the Super Agency can order the privatization of any part of the supply chain or “procurement” (undefined and therefore not limited) and decide what company takes over the services.

“What is planned is not seamless integration. It is disintegration and a patchwork quilt of inconsistent services”, warned Hugh Armstrong, professor emeritus from Carleton University.

“There is no question that this legislation gives access to public non-profit hospital, home care and a range of vital support services for private for-profit companies that they have never had before. It is a prescription for privatization that will undoubtedly compromise quality, safety and lead to two-tier health care,” reported Ms. Mehra.

The legislation and the leaked internal Ministry of Health documents show that the Ford government has been planning this legislation for months behind the scenes, but has not told anything to the people of Ontario. Normally major policy changes are preceded by a discussion paper or “white paper”, which is sent out for broad public consultation before legislation is even written. Once the legislation is introduced in the legislature, it goes for public hearings across the province and amended as a result of the public input received. In this case, there has been no discussion paper, no public consultation, and the documents reveal that the government planned to introduce the legislation and put out services to tender within a few short weeks before the legislation would even be proclaimed and without any allowance for meaningful public input.

“The Ford government has an agenda that it wants to railroad through before people realize what it is,” noted Duff Conacher, co-founder of the citizen advocacy group Democracy Watch. “The process by which this legislation has been created is a total departure from democratic norms. Mr. Ford cannot claim to govern “for the people” and keep secret from the people a health care omnibus bill that will result in major health care restructuring and privatization.”

Last week, the Ford government responded by misleading denials and tactics designed to put themselves on the offensive rather than the defensive. Health Minister Christine Elliott claimed that she had never seen “the leaked document that the NDP revealed today”, on the day of her press conference. She claimed that the legislation was drafted by the non-partisan civil service as though it was just an idea generated independently and her government had nothing to do with it. However, she neglected to mention that Premier Doug Ford’s Cabinet (that is every Minister in government including Minister Christine Elliott) passed the direction for the legislation. She did not admit that her own signature is on the Orders In Council (Cabinet documents) to create the Super Agency and begin appointments. She also failed to note that the documents show that the government intended to introduce the legislation this month and that the tenders for the first restructuring/privatization were scheduled to go out in March. It is not possible that the Health Minister would not be intimately involved at this late stage of the planning. Mr. Ford called in the OPP to hunt for and fire the person who leaked the document. But without that person and the NDP’s intervention, Ontarians would have been in the dark about the government’s intentions for potentially the largest scale restructuring and privatization of health care that Ontario has ever seen until it was too late for them to effect any change.