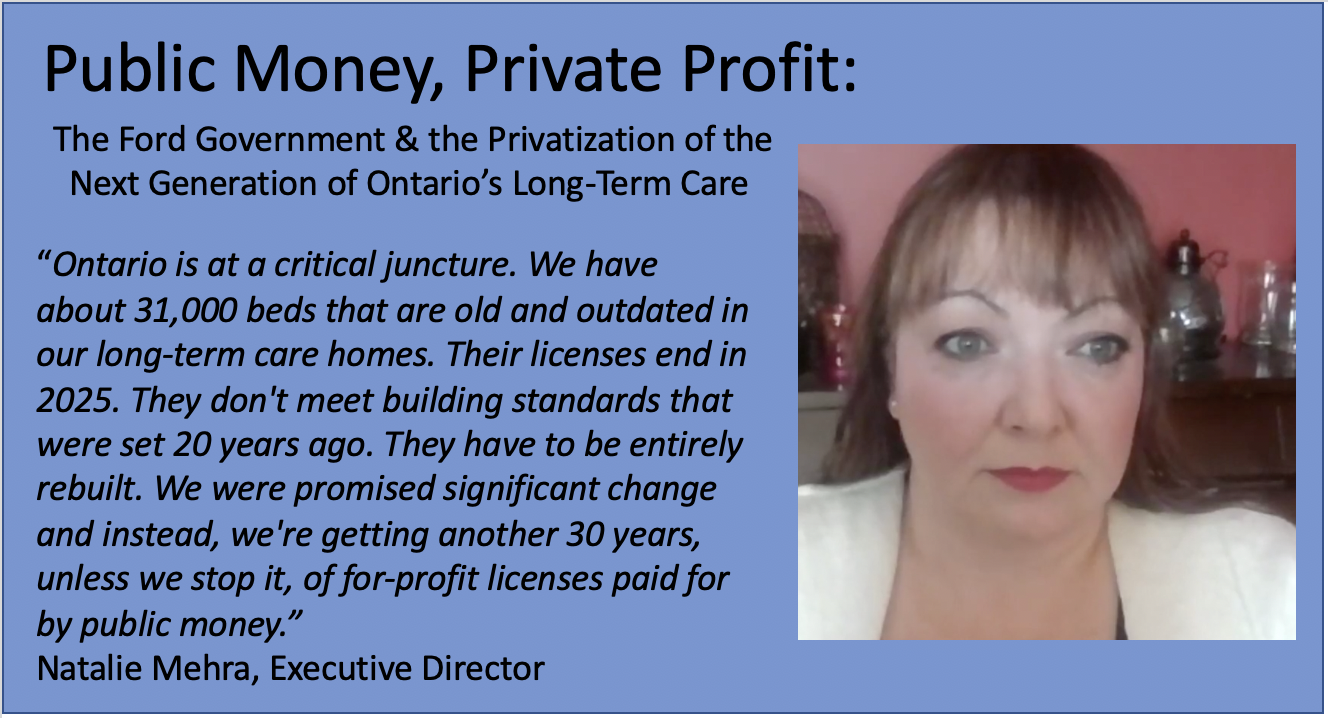 The Ontario Health Coalition was joined by families members of loved ones in for-profit long-term care in a press conference today to release a new report, Public Money Private Profit: The Ford Government & the Privatization of the Next Generation of Ontario’s Long-Term Care. They are launching a province-wide virtual tour to issue a call to action. The public is paying for the homes regardless of who owns them, the Coalition explained, who are calling for them to be built as public, non-profit entities operated in the public interest.

Among the key findings:

“Ontario is at a critical juncture. We have about 31,000 old, outdated long-term care beds with licenses ending in 2025. They have to be entirely rebuilt,” said Natalie Mehra, executive director of the Ontario Health Coalition. “In addition, Ontario is building 15,000 new beds over 5 years for a total of 46,000 beds. It’s huge, and in the next year we will either win them as public and non-profit beds or we will lose them to the for-profits for the next generation. This should have been a new day for Ontario’s long-term care homes given the egregious negligence, incompetence and suffering we saw through COVID-19.”

Many of the projects have not yet received final approval and can still be stopped.

“Tendercare really failed at their job and they failed their residents and the families miserably. They failed to provide the necessities for life and the craziest thing is that they are being rewarded for it,” said Doris Wai, whose grandmother died at Tendercare, which is in process for a new 30-year license and expansion.

“We desperately tried to get a hold of my grandmother to see if she was okay. A few days later we got a call from the hospital doctor who took over the operation of the home, who told us she was in critical condition,” said Reed Zhao, whose grandmother died at Tendercare as well. “The only thing Tendercare did on time was give dividends to its shareholders.”

“They told us there are no issues, we have everything under control. 2 days later, 12 ambulances showed up at Woodbridge Vista,” said Nick Puopolo, whose mother is in Sienna Woodbridge Vista. 10 out of the 12 residents taken to the hospital died.