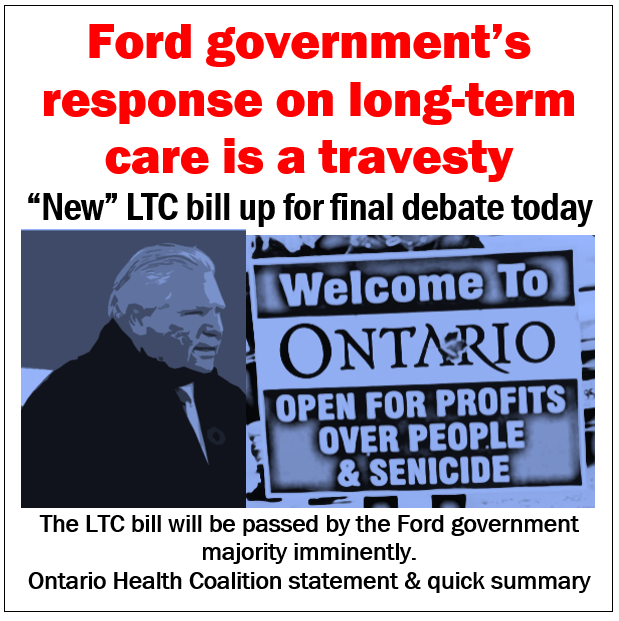 RELEASE: Ford government’s response on long-term care is a travesty: “New” LTC bill to be pushed through imminently

Toronto – The so-called “new” long-term care legislation introduced by the Ford government is scheduled for third and final reading in the legislature today and it will be passed by the Conservative majority likely today or tomorrow. The bill, which is really just a series of amendments to the existing Long-Term Care Homes Act (2007), has been rushed through in advance of the provincial election in order to make the appearance of doing something, without crossing the vital interests of the for-profit long-term care industry, and without committing the funds and political will to the changes that are actually needed.

According to Public Health Ontario, in the twenty-one months since the pandemic began, we have lost 4,037 human beings who were residents and staff in our long-term car homes. They were loved. Their lives matter. Many others suffered unspeakably for want of food, water and basic medical care, lack of human contact, isolation and depression. Many ultimately did not survive these conditions. The Canadian Armed Forces described in visceral terms the unconscionable quality of life and care in the long-term care homes into which they were sent to provide emergency aid.

The public hearings for Bill 37, the “new” long-term care legislation, were announced after noon on Friday November 19 and the deadline to apply for standing was Monday afternoon. Successful applicants were informed on Tuesday for the first day of public hearings which started on Wednesday morning. Families, who have lost loved ones in utter squalor, without even basic care, were given less than one day to prepare presentations. More than 80 organizations and families applied for standing and only 36 were accepted. There is no reason for the government, were it serious about making change in long-term care, to exclude so many who could have helped to forge better legislation. Those allowed to testify were given just 7-minutes to be heard by the Standing Committee on the Legislative Assembly that was conducting the hearings. During the hearings, instead of using their time to ask questions of witnesses and listen to their answers, a number of Conservative MPPs used up the time allotted for questions purposely by talking through the entire time period so as to not give a chance for witnesses to say anything further that might be critical or damaging. It was one of the most cynical uses of public hearing time to which we have ever borne witness.

In the end, the Conservative majority voted down every single amendment proposed by the Official Opposition.

This legislative process is in keeping with the way in which the previous major health care laws have been passed by the Ford government, but it is unprecedented in the history of our province. In our experience, dating back to and including the years of the Harris government in the 1990s, no government has treated public hearings with such cavalier disregard and no one has voted down every amendment from opposition parties on every major piece of health care legislation. We note for the public record that this process is anti-democratic, callous and unacceptable.

In the new long-term care bill there is much that may sound good on the surface but has little meaning in operation:

Where we do see change is in the new provisions enabling the Ford government to promote for-profit long-term care and award thousands of beds to the for-profit chains, including the worst performers responsible for the worst mass casualty in our long-term care history. For-profit long-term care homes had death rates five times those of the publicly-owned homes and double those of the non-profits in the pandemic. For decades, repeated studies have found the for-profits to be worse across a whole range of outcomes for their residents. Under the Act as it is currently written, the awarding of the majority of new long-term care homes to for-profits would not be allowed, and it is expressly forbidden for the Ministry to issue new licenses to operators with terrible records. The provisions protecting the public against these things have been changed in the new bill, and therein lies the reason for this “new” legislation, we believe. This is unspeakably immoral.

The three previous Conservative Premiers of Ontario all joined for-profit long-term care chain company boards after leaving office. Mike Harris went on to chair the board of Chartwell. Ernie Eves joined the board of CPL REIT a month after leaving as Finance Minister, then came back to be Premier after Mike Harris left. (CPL REIT eventually became Revera.) Bill Davis chaired the Board of Revera after he left office. The current director of communications for the Minister of Health was previously a for-profit LTC lobbyist. The former chief of staff for the Ford government’s Attorney General lobbied for a for-profit LTC chain company last summer around the same time that the Ford government decided to pass legislation, introduced by the Attorney General, to shield the industry from liability for negligence in the pandemic. The list of connections goes on and on. In order to win improvements to long-term care that are truly in the public interest, we must stop the revolving door between government and the for-profit industry.

Ontario’s record in long-term care in the pandemic is one of the worst in the world. The suffering and death that we have witnessed is on a scale that requires a response that is momentous, definitive, that casts aside petty greed and partisanship for compassion and humanity.  This new legislation would not stop the same kind of suffering that we are seeing in long-term care now, that we saw in the pandemic, and that we documented and reported for many years prior to the pandemic.

This bill is a tragic missed opportunity and worse. Our province could have really moved forward and improved long-term care. This bill does not do that. Worse, it sets up our province for another generation of for-profit long-term care. Meanwhile, as many of the families of those who have died mark the anniversaries of their loss, and now as the holiday season for many approaches, that loss is felt even more acutely. They had every right to believe that their loved ones would be cared for with compassion and that they would be safe. They have seen no justice, no accountability, no change. They have not been heard. It is a travesty.