Toronto – The Ontario Health Coalition issued an open letter to Premier Doug Ford on May 28, 2020 calling for key improvements to safety and care in Ontario’s beleaguered long-term care homes where more than 1,860 residents and staff have died as a result of COVID-19. Recently a number of media reports, accounts from families, and the military report have revealed that long-term care residents are suffering serious weight loss and decline or even dying of dehydration and malnutrition due to inadequate care. That the staffing crisis is now a full-blown emergency in long-term care is not an overstatement, reported the Coalition, which is hearing from the front-lines of workers and families of residents and is calling for immediate action.

In Quebec and British Columbia, governments have intervened to increase wages and provide full-time work to boost care levels. In recent weeks, Quebec set out to recruit 10,000 PSWs, offering $21 per hour for training and increasing wages to $26 per hour. They have more than 65,000 applicants and are well into the process. In Ontario, there has been no such response. In fact, the Health Coalition reports that it is hearing from front-line staff and families that staffing shortages are worse than ever with many more shifts unfilled even with unprecedented overtime. The Coalition held cross-province consultations on the staffing crisis in 2019 and wrote a report on its findings commissioned by Unifor in December that detailed the staffing crisis (including that virtually every home was working short every shift, worse on weekend and worse in the evenings) and made recommendations to address it. Today the Toronto Sun is reporting that the Ford government’s Treasury Board twice, in the months leading into COVID-19, refused funding appeals to improve staffing levels. Staffing levels equate to care levels in long-term care: without enough staff, there is not enough time to bathe, feed, hydrate, reposition, and provide even the most basic care for residents, let alone provide care with residents and staff sick with COVID-19 and in isolation.

The Health Coalition issued the following report card today, grading the Ford government on its response to the key recommendations made in its open letter, sent a month ago, which has now been signed onto by more than 200 groups representing almost two million Ontarians. Premier Ford has not responded to the Coalition’s letter despite the huge body of Ontarians represented by the groups that have jointly signed. 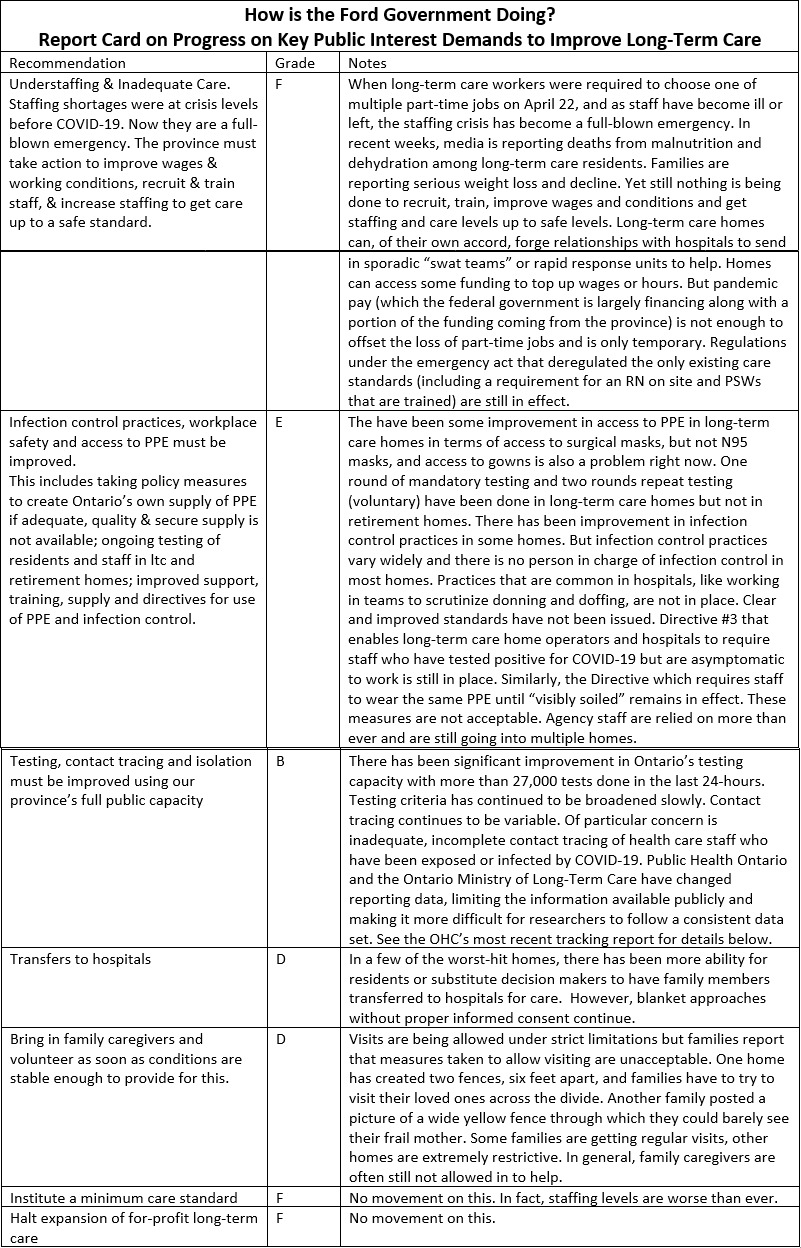