RELEASE & STATEMENT: Statement in Support of the Protests Against Anti-Black Racism & Police Brutality

Anti-Black Racism is a Public Health Crisis…and Much More

We are at an historic crossroads for democracy, human rights and social justice in the United States and here in Canada also. Across Canada and the United States, and around the world, health sector organizations are declaring anti-Black racism a public health crisis. We support this declaration and add our voices to it. Anti-Black racism is also a violation of fundamental human rights, of core principles of justice and is a grave threat to democracy. Racism, police racial targeting, carding, the horrific brutality and violence against Black people, and white supremacy must be named, acknowledged and challenged. They cannot be tolerated. Fundamental justice requires that any punishment must be equitable, must follow transgression of fair and just law, and must be reasonable and humane. The militaristic repression of protest and the free press, illegal detainment without investigation and fair charges, unlawful searches, and the terrible abuse and violence against protesters we are seeing also cannot be tolerated.

Racism and colonialism have cut open a deep wound that remains open and has deepened over centuries of terrible injustice. The pain and anger being expressed by Black Canadians and Americans this week must be acknowledged and supported. We will ourselves and we call on all our members and supporters to join the fight-back that we have seen expand to a crescendo in the last week. As an organization we commit to listen to Black peoples’ voices, to stand up and speak out, to join protests safely in the context of the pandemic, and to do the soul-searching work in ourselves and in our organizations and communities to denounce and challenge racial injustice and dismantle all forms of white supremacy.

For those who do not experience anti-Black racism, and for those who are not aware of the grave human rights, justice and advocacy implications of the military and police actions against public protest and dissent, we need to take the time, to care, and to respect each other enough to educate ourselves as a first step. We are issuing this statement and information for our members and ourselves to gain a deeper understanding of what is happening and what it means. We are asking our members and supporters to take the time to read this attempt to start to educate ourselves, and look more deeply, to listen particularly to the voices of Black people, and to join and support in every way we can.

“Anti-Black racism is a public health crisis that manifests in many different forms, including police violence in Ontario and around the world. Black people are routinely denied access to the healthcare services that are a basic human right. Black children are given lower levels of pain management as white children. Black women receive cervical cancer screening at lower rates than any other population group. People suffering from sickle cell anemia are treated as drug seekers. People living with mental health conditions are turned away or offered culturally unsafe healthcare, leading to increased rates of suicide and suffering.”

“Are we racist in health care? Here’s some evidence about racial bias in pain management:

Mandatory education about implicit bias and structural racism is needed for all health workers. Our institutions need to implement and follow-through with anti-racism policies. And we must collect race based data to measure health quality and equity.”

Dr. Amit Arya, Toronto, Statement on Twitter, June 3, 2020 (Note: all links to these studies are available in the tweet or we can send them to you.)

“There are more Black people living in Toronto neighbourhoods that have the highest number of novel coronavirus infections — indicating that there are health inequities impacting those communities due to anti-Black racism, experts told Global News….The analysis found a strong association between high coronavirus rates and low income, conditions of work, visible minority status and low levels of education. There was an even stronger association between neighbourhoods with a high number of coronavirus cases and those with a higher population of Black people….The findings for Toronto mirror similar findings for neighbourhoods in Montreal. Data published by the City of Montreal showed that immigrants, refugees and lower-income people live in the hardest-hit regions….

And these demographic characteristics are not limited to Canada. New York, one of the most severely impacted cities globally by COVID-19, has higher death rates in poorer neighbourhoods. Black and Hispanic people living in New York City are also twice as likely to die from the virus, compared to white people, according to data from the city.

New data this month from the APM Research Lab, a Minnesota-based research and analysis firm, found that Black Americans are dying of COVID-19 at a rate that’s three times higher than white people. Their analysis found that one in 2,000 Black people in the U.S. has died from the virus so far.”

Human Rights are the basic protections that are understood to belong to every person as a condition of their humanity.

Human rights are violated when Black communities face brutality and violence at the hands of the police, and through inherently racist police practices that criminalize whole communities, such as carding and the designation of “priority neighbourhoods.” Beyond policing, the infringement of Black communities’ human rights permeates the institutions and structures of our society. Systemic racism exists in our prison system, in our schools, in the media and in health care. None of this can be tolerated.

The Canadian Human Rights Act defines human rights as: the principle that all individuals should have an opportunity equal with other individuals to make for themselves the lives that they are able and wish to have and to have their needs accommodated, consistent with their duties and obligations as members of society, without being hindered in or prevented from doing so by discriminatory practices based on race, national or ethnic origin, colour, religion, age, sex, sexual orientation, gender identity or expression, marital status, family status, genetic characteristics, disability or conviction for an offence for which a pardon has been granted or in respect of which a record suspension has been ordered.

An understanding of equity means that we must go the extra step to redress inequalities that mean that people cannot achieve the same opportunities and outcomes due to disadvantage. Here is a picture to show what this means: 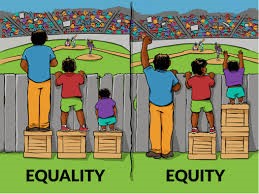 Building upon this, a more recent visualization includes the concept of liberation (sometimes phrased instead as “justice”), in which the emphasis is on the need to not only support people to redress existing inequities but to remove barriers as follows:

Racism is a violation of basic human rights. To redress the terrible toll that racism has taken, we must embrace equity and actively support people who have suffered from historic discrimination and inequality, and we need to remove barriers, to achieve equitable outcomes and to ensure that all individuals and communities can live to their human potential.

Principles of Justice & the Right (and Obligation) to Protest

Fundamental justice requires that any punishment must be equitable, must follow transgression of fair and just law, and must be reasonable and humane. The militaristic repression of protest and the free press, illegal detainment without investigation and fair charges, unlawful searches, and the terrible abuse and violence against protesters we are seeing also cannot be tolerated.

The Canadian Charter of Rights and Freedoms guarantees the freedom of expression, freedom of association, and the freedom of peaceful assembly. Section 2 of the Canadian Charter of Rights protects our right to protest. Throughout our history and in world history, protests have been a vital avenue, sometimes the only avenue, for people to advance the causes of equality, equity and justice; for people to express dissatisfaction or support for important decisions taken by governments and the ruling classes.

As people who are advocates who care about our communities, who believe fundamentally in social justice, a compassionate society and equity, we cannot allow the violations of these core human rights and principles to go unchallenged. In the Health Coalition we believe we have a duty and a moral obligation to protect and improve democratic processes, to advocate for equity, compassion, and anti-racism as core principles of public health care that reflect the values that we believe our society should live up to.

Words are not enough. We are asking that our members and supporters join in our commitment to educate ourselves and to support in every way possible changes to public policy that will dismantle the terrible legacy of colonialism, white supremacy, anti-Black racism and racism in all forms. We all have a role to play in making this happen and a moral obligation to do so. Thank you.