RELEASE: Volunteer-Led Referendum Launched Across Ontario to Save Local Hospitals: Ontarians to Vote Saturday May 28

Volunteer-Led Referendum Launched Across Ontario to Save Local Hospitals: Ontarians to Vote Saturday May 28

(Toronto, ON) – People all across Ontario will be asked to vote on whether they want local hospital cuts to continue or be stopped, the Ontario Health Coalition announced in a press conference this morning in Toronto. Local health coalitions held media launch events in tandem across Ontario. More communities are joining in every day and there will be a second round of launches next Monday.

The coalition plans an ambitious and novel protest. We plan to hold a grassroots, volunteer-led referendum on Saturday May 28. This is a mass vote. Volunteers are asking busy corner stores, drug stores, local grocery stores and other businesses to host voting stations outside their stores on Saturday May 28. Ontarians will be asked to vote, YES or NO to the following statement: “Ontario’s government must stop the cuts to our community hospitals and restore services, funding and staff to meet our communities’ needs for care.”

As Ontario heads into the ninth consecutive year of real-dollar budget cuts to community hospitals’ global budgets, the public is overwhelmingly opposed to the hospital cuts that are biting deeper and deeper every year. The Ontario Health Coalition has been working with hundreds of community groups to hold town hall meetings, launch petitions, bring delegations to the Ontario Legislature and hold rallies. While we have, collectively, saved a number of local services, in general the cuts continue.

“We are calling a volunteer-led referendum to try to make the public’s overwhelming opposition to the cuts to their local community hospitals so visible, so impossible to ignore, that the Ontario government is forced, finally, to listen,” said Natalie Mehra, executive director of the Ontario Health Coalition. “We know that the overwhelming majority of Ontarians want the cuts to be stopped and services restored as a top priority issue, but people need a way to make their voices heard. That’s what we are trying to do.”

The challenge in this referendum is not getting people to vote in support, but rather getting huge numbers of votes.  To do so, hundreds of volunteers are organizing workplace votes in the weeks leading up to Saturday May 28, dropping leaflets off around their neighbourhoods and communities, and asking for volunteers to help staff voting stations on the big vote day.

Ontario is currently in the longest stretch in Ontario’s history. These cuts mean that hospitals across the province cannot keep up even with basic inflation. Hospitals have been cut to the point of dangerous overcrowding and understaffing. Emergency departments are backlogged, wards are full, patients are discharged when they are too frail and re-admission rates have soared. We are calling in the provincial government to stop the devastating hospital cuts and improve hospital funding to at least the average of the other provinces, and also to ensure our health care dollars go to direct, front-line patient care and vital support services. 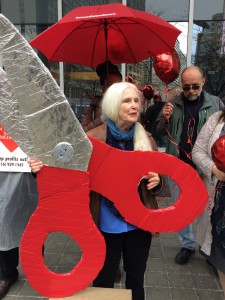 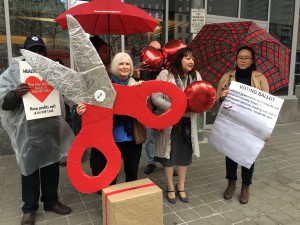 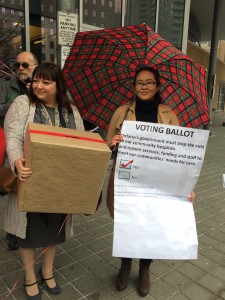