Toronto — Across Ontario, the hospital crisis continues to burn through the resilience of the province’s truly heroic health care staff. As the burden of infectious disease has increased, with the removal of virtually all public health measures to mitigate the spread of COVID-19; the flu, other respiratory illnesses, and a severe backlog of surgeries and diagnostic tests continue to stretch our public hospitals beyond the breaking point. Emergency services continue to be shut down in local hospitals due to the staffing crisis. Paramedics are reporting Code Zero events, meaning all available ambulances are busy and unavailable for emergency calls. The Coalition is hearing from staff in paediatric hospitals that they continue to be full with no beds available. The Ontario Health Coalition released its updated tracking of hospital emergency department closures and services in crisis today.

While there is an international crisis brought on by the pandemic, the depth of Ontario’s hospital crisis is extreme comparatively, and it is not inevitable. Successive Ontario governments have pursued the most radical hospital downsizing policy of the country, and among virtually all developed nations. This does not excuse the current government. When the Ford government took power, it cut hospital funding to below the rate of inflation — meaning real dollar cuts – to force continued downsizing leading into the pandemic despite clear evidence that the hospital cuts had gone too far. Wage restraint legislation that caps wage increases in public health care services at 1 percent while inflation is running at more than 6 percent continues to inflame the deep sense of anger, burnout and injustice among health care professionals who have risked their lives for us throughout the pandemic. The Ford government has remained intransigent, refusing to lift the wage cap despite the unprecedented staffing crisis across hospitals, long-term care and home care. Ford’s fiscal plan was – and remains – to keep hospital costs down to help fund tax cuts.

Ontario has the most extreme hospital downsizing in Canada

Using government data reported to the Canadian Institute of Health Information (CIHI), Canada’s crown corporation responsible for tracking health system statistics, the Coalition compared the most recent available information on the number of hospital beds per person and hospital funding. The results are clear: Ontario has downsized its hospitals to a radical extent seen nowhere else in Canada. This downsizing has been achieved through arbitrarily keeping hospital funding at the lowest rate of any province. 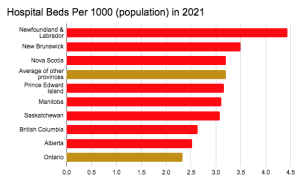 Create a crisis then privatize

While many of Ontario’s large hospitals are running at or over 100 percent capacity– meaning every bed is full and patients are waiting on stretchers for admission to the inpatient units– there are hospital beds, entire floors and units, and operating rooms that exist but are closed because they have not been funded and staffed across the province. In addition, hospital professionals report that MRI shifts overnight have been left unstaffed due to the staffing crisis. In fact, in the most recent review of Ontario’s large hospitals by the Ontario Auditor General (pp. 450) our province’s large hospitals have operating rooms that have been shut down for weeks or months each year due to lack of funding, or even permanently. As the staffing crisis has overtaken funding as the load-limiting issue, the province has failed to implement comprehensive recommendations to mitigate the staffing crisis from organizations representing patients and hundreds of thousands of staff to mitigate it. Instead of choosing to address the crisis by resourcing and supporting our local public hospitals, and by stopping the price gouging by private for-profit staffing agencies, the provincial government is choosing instead to funnel funding and resources to private for-profit clinics and hospitals that often extra bill patients and serve only the healthy, profitable, quick patients and the wealthy who can afford their extra fees that amount to hundreds or thousands of dollars. Those for-profit clinics and staffing agencies pose a real and urgent threat to single tier public health care.

From July 2 – September 16 the Toronto Star compiled data from announcements and local media coverage and found there were 86 emergency department closures in Ontario across 17 hospitals. Cumulatively the closures represent 1,780 hours when people needing urgent/emergency care could not get it in their communities.

An Ontario Health report leaked by the Liberal opposition last week illustrates the extent of the problem in that province. Patients in an emergency room waited more than 33 hours for an inpatient bed in August, a 54 per cent increase compared with the same month a year earlier. Ambulance offload times also rose, with patients waiting up to 83 minutes before entering the hospital.

Here is a list illustrating the extent of the unprecedented, province-wide crisis in our public hospitals:

On October 17, there were no ambulances available in Lanark County for several hours.

On October 16, Dr. Alan Drummond had a patient in Perth who was sent to Napanee for emergency surgery due to no surgery being available locally in Kingston, Brockville, or Ottawa.

Children’s Hospital of Eastern Ontario (CHEO), a pediatric hospital and research centre in Ottawa, is facing “unprecedented volumes” in its emergency department this fall, with many patients admitted to hospital waiting more than 30 hours for an available bed, said president and CEO Alex Munter. The ER, designed for about 150 kids, has had a higher number come through its doors every day in 2022, including 211 patients on Oct. 6. Earlier this week, the hospital’s inpatient medical units were at 127 per cent of capacity, as per reporting from the Toronto Star.

Montfort Hospital in Ottawa closed it’s emergency department overnight on August 6 and August 7, except to admit ambulances, due to staffing shortages.

Carleton Place & District Memorial Hospital’s emergency department was closed for an entire day on August 6 due to staffing shortages.

The Perth and Smiths Falls District Hospital was forced to close its emergency department for three full weeks from July 2-24 due to staffing shortages.

On October 18, Dr. Hassanali Kapasi of Guelph described how terrible the situation was in Guelph, with 20+ admitted patients in the emergency room, a code red EMS situation, and periods in the prior week with 9+ hour off-load times for EMS.

As of October 17, the Ouellette campus at Windsor Regional Hospital is at 106 per cent capacity for medical/surgical patients and the Metropolitan Campus is at 107 per cent. Between the two sites, there are 44 emergency patients waiting for a bed.

Wingham and District Hospital has had numerous emergency department closures since July, with the Toronto Star reporting six closures as of September 16 with an additional overnight closure taking place on October 15.

Seaforth Community Hospital has had multiple overnight emergency department closures over the past few months, closing overnight on October 13, August 21, July 22, and July 12 -14.

On October 12, Essex County announced a Code Black that was in effect for 3 hours on October 12 due to lack of available ambulances in the region.

The Children’s Hospital at London Health Sciences Centre has recently had to transfer patients who need an ICU bed outside the region due to limited capacity in their pediatric ICUs.

The Port Colborne Urgent Care Centre was closed overnight on October 8 due to staffing shortages.

St. Marys Memorial Hospital experienced numerous emergency department closures over the past few months, with overnight closures from August 22-26, on July 24, on July 22, on July 8, and a full day closures on July 23.

Clinton Public Hospital closed its emergency department numerous times over the past few months, closing its doors on August 12, August 6, July 11, and 3 days from July 2-4. The hospital has continued to operate with reduced hours from 8 am – 6 pm when it has been opened, with the exception of July 12, when the emergency department closed at 2 pm.

On October 12, an Orangeville ambulance operated by the Dufferin County Paramedic Service, had responded to a call in Dundas, which is an approximately one-hour-and-15-minute drive away.

SickKids Hospital’s intensive care unit reached full capacity over the weekend of October 8-9 and had longer than normal wait times in the emergency department.

This fall, McMaster Children’s Hospital in Hamilton reports having to more frequently transfer children from their own region to another part of the province and children from south central Ontario have recently been transported to Ottawa for a pediatric ICU bed. SickKids Hospital in Toronto has also not been able to accept some children in the area who need lower levels of ICU care, forcing those patients to be transported to other pediatric hospitals farther away.

A section containing 10 beds at Kingston General Hospital’s emergency department closed during the weekend of July 30-31 and Hotel Dieu Hospital’s Urgent Care Centre shut its doors at 6:20 pm instead of 8 pm on August 1 due to reaching its full capacity.

Credit Valley Hospital reported emergency room patients waiting for an average of 34.8 hours in July. In October, 104 patients were reported to have been waiting in the ER for admission.

Red Lake Margaret Cochenour Memorial Hospital (RLMCMH) closed its emergency department overnight on July 7, which was the 2nd closure this year after a closure on March 26.