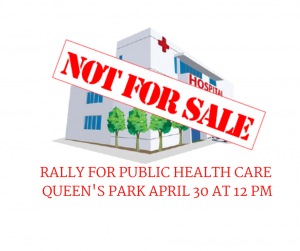 Toronto – The signals that Doug Ford intends major health care privatization, restructuring and cuts have become undeniable: if you care about health care for all it is time to come out.

The Ontario Budget contains bad news for health care. Cuts are coming. Overall health funding increases are less than population growth and inflation and do not cover aging and increased utilization costs. This means that access to health care will continue to fall further and further short of population need. Hospital funding in the Ontario Budget does not even meet inflation. This is what economists call “real dollar cuts” to public hospitals. Community care just meets population growth, aging and inflation with no improvement. There is not enough money in the budget to deal with the current needs in long-term care let alone the planned expansion of the long-term care home sector. Who is supposed to provide the care? In the Budget, Ford also announced plans to cut public health units from 35 to 10. Today fresh plans were announced to merge and cut ambulance services from 59 to 10.

Shelly Jamieson, one of the board members of the Super Agency, is the former president of Extendicare, a for-profit long-term care home giant. She was on the Mike Harris government’s Restructuring Commission that ordered the closure of >40 hospitals and thousands of hospital beds, then moved to Extendicare which gained from the subsequent expansion of long-term care. Now she is on the new Super Agency, this government’s Health Restructuring board.

Elyse Allan is on the board of Brookfield Assets Management and the right-wing pro-privatization C.D. Howe institute and was recently on the board of the Conference Board of Canada, the Chamber of Commerce and so on.
Other board members include people from banks and private corporations including Real Estate Investment Trusts and others with direct interest in health care privatization.

Under direct questioning in legislature neither the Health Minister nor Premier would deny plans to privatize using the new powers they have given themselves in Bill 74. Opposition parties have asked direct questions about private surgery clinics bidding to take over our covered services and neither Premier nor Health Minister will say anywhere that they will not privatize.

In Bill 74 the Minister of Health has given herself and the Super Agency vast new powers to order and otherwise accomplish privatizing of most of our health care services.

In Bill 74, which is being pushed through the legislature as we write, the government has kicked off their plans to force mega-mergers, transfers, service closures, and privatization on a huge array of health care services including hospitals, long-term care, home care, cancer care, health records, community mental health and addiction services, community care services, palliative care, community health centres, non-profit primary care, laboratory and air ambulances and more.